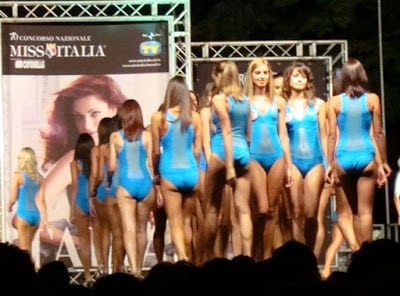 This is an entry for Tara Cain’s The Gallery, the theme this week is “Here Come the Girls”.

Summer 2009, a fantastic holiday on Lake Garda, staying in the town of Bardollino. The favourite night for husband and son was our final evening in the neighbouring town of Garda which was playing host to the regional finals of the Miss Italy contest. Despite the fact that it was starting late even my lazy son perked up at the thought and quite happily walked with us all the way to the town.

The contest was held in the open air with seats for everyone to watch, free of charge. For a good couple of hours we watched 31 Italian hotties strut up and down the catwalk. I kept thinking they would whittle them down to the final 15 or so, but the same 31 were shown in dresses, swimming costumes and bikinis. When a further round started, with clothes being added this time, the lads decide they had seen as much as they were going to, so we made our way home. For my part, I’d seen quite enough pert bottoms for one night, thank you very much!

The photo above was a shot I took but Number One Son, showing a boldness I’d never witnessed before, shuffled down to the front of the stage and muscled his way into the press corps with his little digital camera. He got some great pictures which he then posted on Facebook which increased his kudos at school no end when he returned in September. Here’s a couple below! 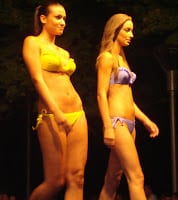