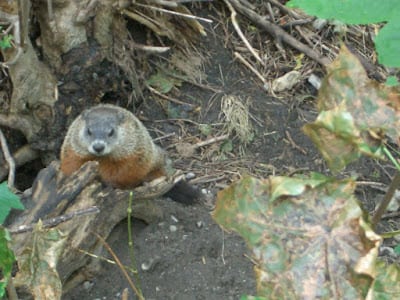 Two summers ago we had a fascinating fly-drive round Eastern Canada, visiting cities such as Toronto, Montreal and Quebec. A few days were spent in Ottawa, which I had read had been dubbed one of the dullest cities in North America. With our expectations therefore pretty low, we were pleasantly surprised by how charming it was. There was something rather British about it, including The Changing of the Guard every morning and architecture very reminiscent of Edinburgh.

As usual I was spouting forth nuggets from our guide-books, boring the boys witless about the fact that Queen Victoria supposedly chose Ottawa as Canada’s capital based on a pretty watercolour painting she’d seen. I also amused myself with the thought of contracting “Beaver Fever” during our stay; much ribbing from husband about it being too hot to handle and such-like. Oh how we laughed.

It was while we were ambling along in Ottawa that we kept seeing little furry animals popping out of holes near the river bank and along the canal. They were quite chubby, with reddish brown fur and probably measured about 2 ft in length. We sat at a cafe by the canal trying to decide what they were. In the end I plucked up the courage to go inside to ask the cashier.

“Can you tell me what the little furry animals are outside?”

“Sure”, he replied, “They’re groundhogs”

“Yup, that’s right, we have hundreds of them round here”.

Who’d have thought it! I was very excited when I returned to the boys to tell them. We gave Rory a quick synopsis of the film: Bill Murray gets stuck in time during Groundhog Day and has to replay the day over and over again.

Dougie then smiled wickedly and said,

“Go back into the cafe and ask him again”.

This is my entry for The Gallery this week, the theme of which is “Creatures”.