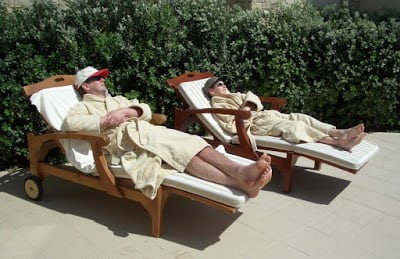 Look at these two – Hugh Heffner and Junior relaxing by the pool.

I snapped this photo a couple of years ago in Cyprus. The boys were completely unaware that they had mirrored each other’s position on the sunbed: head, arms and crossed feet exactly the same.

There is also a story behind the bathrobes. Are you sitting comfortably? Then I’ll begin.

When we first arrived at the hotel we noticed that we had two very lovely towelling robes hanging up in the bathroom. I decided that as our son was 12 and was considered an adult as regards the cost of staying there, he ought to have one too. So we asked at reception for an extra one. Son loved his new dressing gown.

On day three the maid decided in her wisdom that our room should only have two bathrobes so removed one of them. Thankfully that afternoon the housekeeping supervisor knocked on the door and asked if everything was to our satisfaction. This gave me the opportunity to say we needed our extra robe back again. Within an hour we had another one delivered. Sorted.

From day four onwards we decided to hide our son’s bathrobe in the wardrobe just in case enthusiastic maid took it away again. This seemed to work until day six. From where we were sitting in the hotel grounds we could see the front door of our room. We spotted the housekeeping supervisor knock on our door then use her key to go in. It dawned on me that she was going to check whether there were three bathrobes. Of course she wasn’t going to find the third one, stuffed as it was in the cupboard, behind a pile of clothes. So we watched with interest as she came out, bristling. Ten minutes later poor maid was hurrying to our room, carrying with her another bathrobe and looking a bit bewildered. So we returned to the room knowing we now had four robes. We left the extra one folded up in the room and decided to return our previously hidden one back to the bathroom. (Have I lost you yet?)

The following morning I was anxious that the poor maid had got into trouble for supposedly removing the dressing gown so when she came to tidy the room I showed her the extra one. She looked at me, puzzled:

“WE DON’T NEED THIS EXTRA ROBE, WE HAVE FOUR NOW”, I shouted in that exaggerated way we Brits have of making ourselves understood in a foreign country.

“Yes, FOUR!” I started gesticulating with many hands, pointing to the extra one on the table. She smiled at me and nodded a little before getting to work on cleaning the room, so we got out of her way, sitting on the patio until she’d gone.

Half an hour later I returned to the room and there, on the table, in a neat pile were…. FOUR…. NEW towelling bathrobes. I think I shrieked at this point and ran into the bathroom to find the other three still hanging up. So for our final day in Cyprus we had accrued a grand total of SEVEN big fluffy bathrobes and doubtless the maid thought I was completely bonkers. Having seven of them, it was very tempting to stuff one into our case as they obviously had no idea how many we actually possessed, but…but….I just couldn’t do it. So my haul of ill-gotten gains to be shoved into the case included 6 lost golf balls, a selection of toiletries, sewing kit, plastic shower cap, miniature toothbrush and paste, shoe shine and a book from the library that I hadn’t quite finished…..

This began as a prompt for The Gallery which was to find a photograph representing one of the seven deadly sins. It ended with a rambling story about dressing gowns!