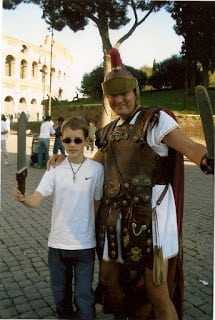 36 nuns on a zebra crossing in Rome was my entry for The Gallery last Wednesday, a photo from our first European city break as a family in 2005, when my son was 9 years old. It wasn’t the first time I’d been to Rome: my Mum jogged my memory yesterday of a family holiday there when I was 13, traipsing behind my Dad as he strode ahead of us, pointing out all the architecture as my mother, brother and I whinged to stop for a rest every five minutes. To this day we tease my Dad relentlessly by recalling the fact that we seemed to spend the whole trip following signs to some elusive saint’s relics when we were in fact following the sign for a one-way street. 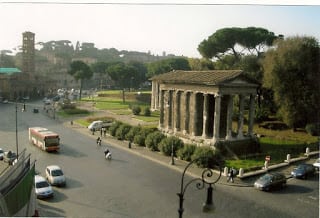 Rory was the right age for a trip to Rome. An interest in history cultivated by a diet of Horrible History books, he was bound to find something appealing about Romans, gladiators….and lots of pizza. We stayed in the Hotel Forty-Seven, a newly-opened chic hotel with a fabulous view (see photo) and a magical rooftop terrace for late night tipples. It attracted new visitors by keeping prices low for the first season. I see it’s still doing well in the Tripadvisor lists.

We kept Rory amused by avoiding queues whenever we could so we passed on some of the big sights (St Peter’s and The Vatican were too busy that half-term week) and focused on a variety of attractions to give our son a flavour of the city and its rich past but geared towards a younger tourist with a short attention span.

To gain a brief but vivid background to Rome which was palatable to our computer-game-junkie son we visited the Time Elevator. Purists would argue that we were mad to sit in a dark room being bombarded with 3-D images of Rome when history was outside for the taking, but Rory adored it and the timeline of the city was firmly lodged in his mind for the rest of the holiday. 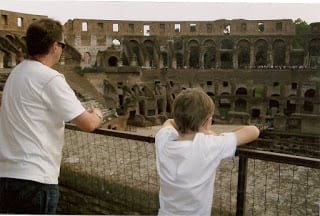 We were all keen to see the Colosseum and it didn’t disappoint, though as parents we gave it the thumbs down for the jobsworths in the ticket booths who wouldn’t accept that our 9 year old was under 18 as we didn’t have his passport with us. Throw ’em to the lions I say. Don’t get caught out paying more than a few euros for the inevitable photo with the gladiator either. We checked the price before agreeing: some hapless souls had the photo taken first and were then asked to hand over a small fortune.

Ask Rory now what his favourite part of the holiday was and he will say, unequivocally, the Capuchin Crypt. You might be forgiven for thinking the Santa Maria della Conzezione dei Cappuccini was the founding church of the Starbucci Famiglia but you’d be mistaken. Instead, in six tiny chapels beneath the church, are the bones of 4000 friars. Monks with dubious taste yet an obvious artistic bent, used the bones over a period of 200 years to decorate the chapels with intricate patterns. Having a delight in the macabre is an essential quality for any visitor to these crypts. How charming to have the “crypt of the pelvises” and the “crypt of the leg bones”. To end the visit on a cheery note, a placard states the following:
“What you are now we used to be, what we are now you will be”. 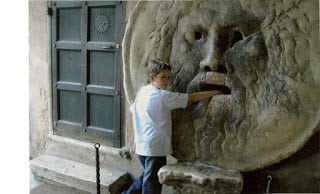 Near our hotel was the church of Santa Maria in Cosmedin, home to the famous Bocca della Verita (mouth of truth). For hundreds of years people have placed their hands in the mouth, the legend being that if you told a lie your hand would be bitten off. To think, if you want a lie-detector test now you have to go on  the Jeremy Kyle show.

How else can I entice you to visit this beautiful, if somewhat noisy and chaotic city? The food. Pizza, pasta, ice-cream: a child’s paradise, particularly as the waiters make such a fuss of kids and make them feel so welcome in their restaurants. Not bad for the adults either. My husband still remembers ordering a grande birra one lunchtime and being given a huge bucketful of lager. Not good at afternoon drinking, he was proper plastered as he weaved his way through the city streets afterwards. A bit of a lie-down was needed before we crossed the Tiber to the Trastevere district of the city for another historic meal, this time washed down with a nice Chianti…..