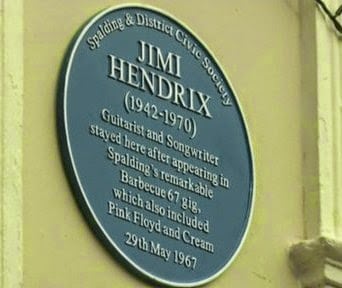 On 29 May 1967 our little sleepy town of Spalding became host to one of the first ever rock festivals. Held in a tulip bulb auction shed, Barbecue ’67, for an admission price of £1, provided ‘non-stop dancing’ from 4pm to midnight, hot dogs and a licensed bar.

When the promoter originally booked some of the acts they were still relatively unknown but within months they had hit the big time and, honouring the booking, turned up to play. On the bill were Geno Washington and The Ram Jam Band, Zoot Money, Move, Cream, Pink Floyd and The Jimi Hendrix Experience.

The bulb shed held 4000 people but thousands more turned up on this hot, sticky Bank Holiday to see some of the biggest names in rock.

Over the last few years the Spalding & District Civic Society have been looking to highlight places in the town which have had interesting residents and guests. Many people suggested The Red Lion Hotel in the town should have a Blue Plaque to commemorate the gig and the fact that Jimi Hendrix stayed there overnight. The current owner of the hotel, proud of this former guest, has also stated that girls were flocking outside Jimi’s window and he apparently knotted his bed sheets together so they could climb up. Whether any of them took him up on his offer is unknown!

Earlier this month, the plaque was unveiled by the original members of local group Sounds Force Five, who also played at Barbecue ’67 and have the most amazing memories of a truly historic night.

You can imagine my surprise, having only just seen this shiny new plaque in our town square, to find another blue plaque to Jimi Hendrix this weekend. Not the official English Heritage one in Mayfair, London, showing where he lived from 1968-69, but a slightly less official one in the window of Marshall’s Fish and Chip shop in Tynemouth, near Newcastle. It would seem that just a couple of months before staying overnight at the Red Lion in Spalding, Jimi Hendrix was having his dinner at the seaside… 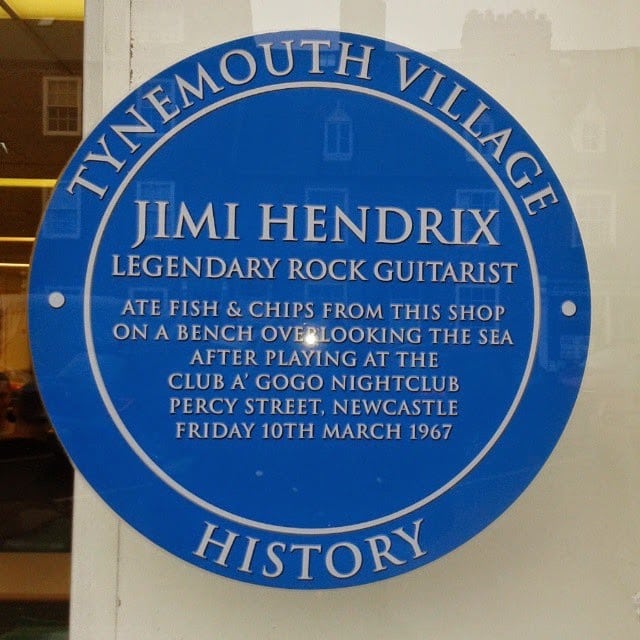