Home  >  Blog  >  Mum’s Gone to the Phallus Museum – Shiny Happy People Meme
After a good giggle yesterday with Linda at “You’ve got your hands full” regarding regional accents, we somehow got talking about the Julie Walters “Two Soups” sketch. Later that evening the sketch turned up again in Linda’s response to Rosie Scribble’s new meme “Shiny Happy People”. Now I’ve been tagged to come up with a favourite image and song that can bring a smile to my face.

An image that makes me smile has to be this, taken in 2007 outside Iceland’s Phallological Museum. Now Linda, don’t tell me this doesn’t warm your cockles??! 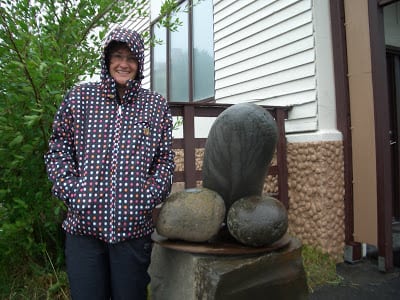 I could attach a link to my original post but to save you the hassle, here’s a chunk of it!

Probably the only museum in the world to contain a collection of penis specimens belonging to various types of mammal. How bizarre is that! Not a pornographic collection, apparently phallology is an ancient science!! Well I’m
all for extending my scientific knowledge so we take a look. There are over 180 penises in this little room, 49 of them from whales! We’ve got examples from polar bears, horses, seals and walruses all over the place, attached to the
walls or pickled in formalin! Goodness me, I’m blushing and
Hubby is feeling quite inadequate, probably because of me exclaiming “Ooh, look at the size of that one!” every few seconds. So we move onto the smaller mammal section and he can look at the teeny hamster specimen instead! The museum also has four legally-certified “gift tokens” from four men who are going to offer their penises to the collection when they die. My favourite is an American chap who has sent in a photo and cast of his beloved member which he affectionately calls “Elmo”. Apparently when he dies his wife is going to look after Elmo until she’s
had enough of it; she will then send it to the museum……..which is nice!

For my favourite song, I have to choose “Oh What a Beautiful Morning” from the musical Oklahoma! I played the lead role in 2006 with our local am-dram society and absolutely loved it. My Curly was a local solicitor whose wife even permed his hair for the week of the show for authenticity. I haven’t a video of our production, but have scanned one of the photos of the show for you! 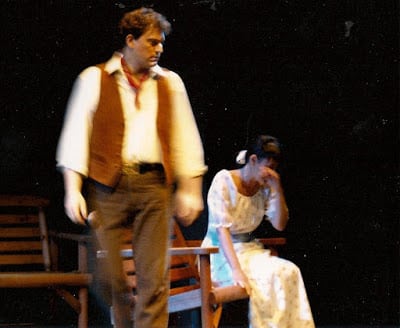 Here’s the song with Hugh Jackman playing Curly: isn’t he just gorgeous and doesn’t the song lift your spirits.

Right I need a cold shower now so feel free for anyone reading this to join in the meme. Consider yourself tagged!