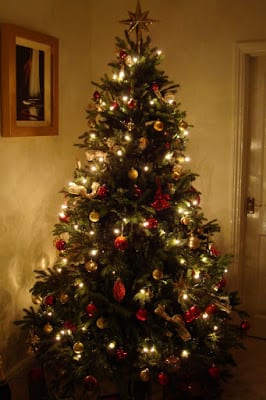 “‘Twas the night before Christmas
When all through the house
Not a creature was stirring,
Not even a mouse…”

IS THAT RIGHT?! Last Christmas we had a little family of mice come to stay and they were creating absolute havoc, never mind “stirring”. Simple enough problem, you might think, no need to over-react. However the little furry creatures decided to make a nest……….in my box of Christmas decorations.

Picture the scene if you will. Husband brought the box of beloved baubles in from the shed and left them on the hall floor for me to do my arty-farty thing with them. Box sat there for a couple of days until I summoned up the necessary creative juices to get on with the job in hand. Sunday afternoon, early December, CD of kitsch Christmas music entitled “Cool Yule” playing in the background, tree was ready to be dressed. It’s artificial. So sue me – I like uniform branches. I lifted the box nearer to the tree and saw a wet patch on the carpet. We have no animals and our son is past the age of leaving puddles so I was perplexed by the stain. I then discovered a hole in the base of the box. I opened the box and shrieked, very loudly, as little Jerry and his family scuttled out and ran into the kitchen.

Dear readers, can you feel my pain as I looked into the box? All the collected decorations from my own childhood, the lop-sided fairy and my son’s early, painstaking attempts to make snowmen out of loo rolls and cotton wool, all soaked in mouse pee and covered in droppings. I cried. A lot.

There was no way to rescue the treasured decorations, so we had a ceremonial burning and I cried even more. This was on a par with the disaster that occured when we forgot to tell the painter not to paint the back of the door in the spare room where we had marked our son’s height over the years. He wondered what the marks were but, not having a family himself, just slopped a coat of gloss over the top. Thank you for that. I was inconsolable.

But hey, I had to keep some perspective on this so decided to see the positive. I now had a reason to buy a whole new set of co-ordinating decorations for my beautiful tree. I could now have a proper “John Lewis” tree.

A long time ago I used to work for John Lewis and in my burgeoning youth spent three years in the Christmas department. I am good at decorating trees: I like them balanced (and plastic) and I like them themed. And now I could make my own from scratch. My silver lining after that awful cloud.

I had the time of my life buying everything in red and gold: beautiful baubles, delicate glass teardrops, all tasteful, no grotty ones you would normally hide round the back. Husband felt so bad for me and was so anxious for me not to dissolve into tears again, he didn’t bat an eyelid when the credit card bill arrived.

For the next few weeks we waged war against Jerry and his mouse posse and eventually won. The new decorations were packed away in a mouse-proof, plastic container and remained in the house. This year, when I unpacked them, I was even able to say “ooh I’d forgotten about that lovely bauble” as if it were some pre-war family favourite.

Unlike me to regale you with a sad tale though, so to cheer you all up, I must share with you a story from my John Lewis days. It was the beginning of September, a rather warm September, and the Christmas department was about to open. There I was, unpacking boxes of tinsel, when a very glamorous, blonde woman strutted down the aisle. She stopped in her tracks, looked disdainfully at me and announced very loudly:
“OH GOD! CHRISTMAS! AND I’VE STILL GOT A TAN!”