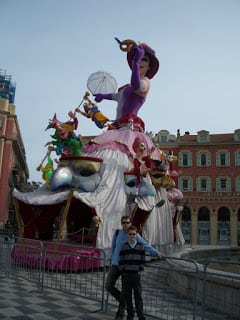 Nice Carnival : these floats are massive and sit in the town square ready for the procession later in the evening!
After the usual difficulties getting son out of his bed to go to breakfast, we head off into the sunshine to have a walk around Nice. The main Promenade des Anglais stretches for 4 miles from the airport in the west, curving round the Baie des Anges (Bay of Angels) to the old town. Constructed in the 1820s with money from an English clergyman, it’s now a very wide strip along the sea-front filled with walkers, rollerbladers and cyclists. What fascinates me is the large number of beach restaurants that are dotted along the beach just under the promenade; quite unlike anything I’ve ever seen in the UK or even in other Mediterranean seaside resorts: the tables are set with linen napkins, tablecloths,sparkling glasses, good china – no plastic chairs or wipeable surfaces here. It’s a chilly February morning and yet couples are sitting here facing the sea having their breakfast – croissants and pots of coffee, and the morning paper. How very civilised!
We are heading to the Colline de Chateau, a 90m hill overlooking the town. Nice was founded on this site by the ancient Greeks in the 4th century BC. They called it Nikaia, meaning victory, and set up an industry of sportswear 😉 All that remains of the fortress on the hill are a few ruins but the area is a beautiful public park and once you climb all the steps to the top there are some fabulous views. The three of us are just enjoying the peace up here when an almighty boom frightens the life out of us. A little late I remember reading about the cannon which is fired every day from the top of the hill. When our heart rates return to normal I tell the boys about the story of the noon cannon – apparently a retired English colonel from India started the custom to remind his young wife, who was always late, that it was time to come home and cook him his lunch. Husband and son think this a fine idea whilst I’m fizzing at the audacity of the old fossil. 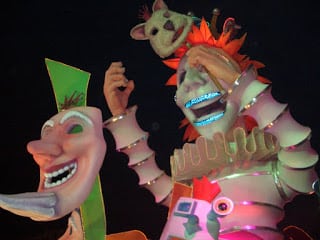 One of the reasons we came to Nice this week was to see the annual carnival, a series of parades which last for about a month. There are two parades this week; a flower parade tomorrow and an illuminated night parade at 9pm this evening. No health and safety jobsworths here, you can stand where you like even if your feet are likely to be mown down, and please feel free to squirt as many cans of silly string as you like at each other and everyone on the floats! The town is already covered in the remnants of silly string and confetti from the last procession but as soon as people start gathering, everyone starts squirting each other. I have to say the adults are by far the worst culprits; demure old ladies shrieking and laughing as they cover passing strangers with luminous goo.
There are about twenty floats measuring up to 60 feet high, designed by international cartoonists and sculptors, interspersed with Notting Hill style dancers. I get excited with our local Spalding Flower Parade every year but this is something else. Rory’s favourite is a huge dragon/dinosaur thing which breathes smoke and moves about using some amazing technology. I like the one designed by a British Financial Times cartoonist – a tattooed man sitting on a huge motorbike. An hour or so later, covered head to toe in string and confetti, but unable to feel my toes, I nudge the boys and we make our way back to the hotel.
Rory and I are able to brush off the string quite easily as we had put raincoats on but daft old Dad has to spend a good while in the bathroom picking the stuff off his jacket. Can you imagine that being allowed in Britain – there’d be letters to the papers about ruined clothes, compensation claims etc, whereas here in Nice everyone has a good chuckle and a bit of a rub down with a wet flannel.
February 2009