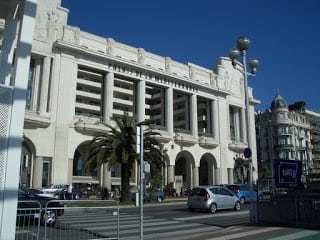 I start the day fighting with the hotel hairdryer. What is it about these stupid contraptions that are attached to the wall of the bathroom and only work when you press the button down constantly? If your thumb releases pressure it immediately cuts out. It’s a safety feature but it makes really hard work of drying your hair. Marginally better, I suppose, than the hairdryer hidden in a drawer with a cord so short it doesn’t reach the mirror. So begins my day, with a hopeless blow-drying attempt, followed by the discovery that Hubby has packed a travel adapter which doesn’t work: so I can’t even rescue the hair disaster with my straighteners! But lovely chap disappears after breakfast, ostensibly to buy some baguettes for the journey, and comes back what seems like hours later, with a working travel adapter. What a sweetie!
However, as it has taken him so long to locate said adapter in the huge Carrefour supermarket, we’re now too late for me to do anything with my hair, so quickly check out of the hotel and leg it across the road to the station to get the fast TGV train to Nice.
The platform for the train is only announced a few minutes before departure so we are all fidgeting at the starting blocks before everyone suddenly heads for the escalators en masse. I tell Hubby that our tickets needed stamping in a special machine before we get on the train. He reckons we don’t. But as we approach the escalator we see the little machine and hold up all the other passengers by validating our tickets at the last second! I don’t say I told you so but chalk it up in my little imaginary “got one over on you there” book. His mood isn’t helped by the escalators not working so he has to wrestle with our two cases, which have the combined weight of two sacks of potatoes.
It’s a long journey down through France to the South coast, over 7 hours, but it is so relaxing it’s like a holiday in itself. We have a table seat at the end of the carriage and, as we have upgraded to first class for not much extra expense, the seats are comfy, wide and reclining. Spend the next few hours reading, playing cards and mostly just looking out of the window. As we approach Nice station I leave it to the last minute before paying a visit to la toilette and get stuck in the aisle behind a lovely old deaf Frenchman whose wife tries to explain to him that he needs to move as madame needs pee-pee. He misunderstands, assumes she is ordering him to have pee-pee himself, and promptly shuffles into the loo, leaving me with no choice but to hold on until we get to the hotel.
Hotel Palais de la Mediterranee is absolutely gorgeous. Very art deco, bang slap on the sea front, and very relaxed, charming staff. For once we splash out and get an interconnecting room for our son. He’s now nearly 13 and it’s getting a bit much for the three of us sharing rooms all the time. He thinks this is amazing, he has his own big fluffy dressing gown, slippers and, unfortunately, access to his very own minibar. Minibar prices are even more outrageous than normal thanks to the poor exchange rate, so Rory is under pain of death if he so much as looks at the mini pack of Pringles priced at 7 quid.
We are spoiled for choice as regards eateries and, as Nice is very near Italy and was under Italian rule for many years in the past, their Italian restaurants are excellent. Find a gorgeous one in the old town, La Favola, have bowls of pasta, lovely bottle of plonk and saunter back along the sea front.
Back in the room I discover that the only reasonably priced item in the minibar is, surprisingly, a travel adapter. About the same price as the one my poor stressed husband had bought at the supermarket in Lille this morning, causing us to nearly miss our connection. He doesn’t seem awfully pleased when I tell him: can’t think why………
February 2009