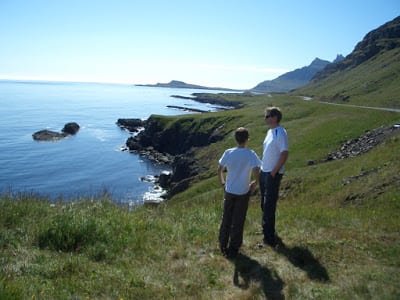 Is that a blue sky I see before me?
Leave Lake Myvatn this morning and have a long drive through Iceland’s desert to reach the beautiful Eastern fjords. Blue sky, warm sun, calm sea (why wasn’t it like this yesterday?) and we’ve got T-shirts on!!! Our next stop is Hotel Stadarborg near the village of Breiddalsvik. The hotel is in the middle of nowhere, though just off the main road, and the owner we discover is a bit like the shopkeeper from the old Mr Benn TVprogramme; anywhere you are he seems to pop up! Does he run this hotel all by himself? He appears to be on reception, in the kitchen and is vaccuuming the corridors too.
Decide to explore the area and come across a little pine cafe/restaurant with a breathtaking view of the sea. Owned by a German couple, Cafe Margret is a gem of a find. We have huge frothy coffees and a massive slab of chocolate cake of Germanic proportions. For some reason the name of the cafe reminds us of that sketch in Little Britain where the little shopkeeper calls upstairs to his wife when he can’t find what the customer wants (…are you with me??). Have to try and stop son and husband from saying “Margaret!…..Margaret!” every few minutes. Even when we leave, this little phrase becomes the saying of the holiday and drives me nuts though the two “boys” seem to find it continually hilarious.
Sitting at dinner tonight and the fog has rolled in really quickly from the sea so it’s a pea-souper as we look out of the window. It’s nearly 8pm and two tourist buses arrive with their weary passengers who have five minutes to get checked in before they are herded into another room to have their dinner. Have had to thank hubby many times this holiday for stopping me from booking a guided tour holiday of Iceland rather than hiring a car. It may be scary at times but at least I can get hysterical in the comfort of our own vehicle. And I’m having a lie-in tomorrow morning: doubtless the bus loads will have been breakfasted and carted off well before we get up!
July 2007