Home  >  Blog  >  Come on, Eileen! Finding the weird and wonderful in museums

Who doesn’t love a museum which is a little bit weird and wonderful? Not for me a boring traipse around some dry old exhibits, usually accompanied by long-winded information on signage boards.

I much prefer a museum which hasn’t been curated by a committee. Places like Kelvingrove Art Gallery and Museum in Glasgow where a World War Two Spitfire jostles for position with a stuffed giraffe in the main atrium. And where I found my favourite ever exhibit – a 17th century ‘bollock dagger’. The name comes from the two swellings at the base of the knife, not, as I thought, a weapon designed to poke into specific body parts.

Our son, Rory, was brought up on visits to museums and art galleries where, to pass the time, and fire up his enthusiasm, we played games such as the blasphemous “Find the strangest-looking Baby Jesus” or “Spot the Celebrity in an Old Master”. I still recall a Joan Miro painting in Madrid which will be forever known, in our family at least, as E.T.’s Mother. Or the corker in Paris we re-named Andrew Lloyd Webber frightens the masses.

We showed spectacular parenting skills by taking our ten year old son to the Penis Museum in Iceland. Goodness, that could have scarred the boy for life, seeing hundreds of stuffed or pickled willies ranging from sharks to mice. I found pointing and laughing was a preferable method of dealing with this; far better than trying to have a meaningful conversation.

Thankfully the experience doesn’t seem to have put the boy off anatomical exhibits. A few months ago he joined us for a few days in Edinburgh and we spent a fascinating morning at the Surgeon’s Hall Museum. The collection of pathology specimens isn’t for the faint-hearted but, now aged 25, our son has a strong stomach and innate curiosity, developed after many years of spending wet days in kooky museums.

One other thing we discovered at Surgeon’s Hall was that my husband Dougie made a wise decision to become a GP after qualifying as a doctor in the 1980s. Watching him ‘having a go’ at the robotic surgery equipment was an eye-opener. The world was certainly saved from his surgical talents.

Another Scottish trip last summer took Dougie and I up to the Highlands. Driving north from Inverness we visited the spectacular Dunrobin Castle. Looking like a glorious French chateau overlooking the waters of the Moray Firth , the family seat of the Earl of Sutherland is an absolute beauty. It’s only five miles from Brora which I was also keen to visit until Dougie informed me the town wasn’t the home of the luxury cashmere company. So there would be no factory shop rummaging for me.

There was, however, a small but very stuffed museum in the castle grounds for me to explore. Looking very like the Grant Museum of Zoology in London, the walls were full of hunting trophies. Generations of Sutherland family enjoyed extensive travel and hunting so the ubiquitous animal heads had sadly taken up residence here. I tried to ignore the poor creatures on the walls and focus on the other exhibits. I discovered that Eileen, Countess of Sutherland in the early 20th century, was quite a character. A Red Cross nurse during the first World War and Mistress of the Robes to Queen Mary, Eileen was beautiful, sporty and independent. I loved the little trophy I found in one of the display cabinets engraved with the words, Surfing trophy won by the Countess of Sutherland in Panama, Hawaii, in 1937. What a woman!

In contrast, the museum is also home to a metal plaid brooch with the accompanying text: Voted to John McAlister, Tulloch Castle, as the second best dressed at the Competition for Pipers, Edinburgh, 1838.

How crushing is that  – all the visitors to Dunrobin Castle are witness to John’s achievements. He’s not recognised for his skills as a piper and he’s not even the best dressed on the day. Second-best. I think if I’d been John or his descendants I’d have popped that one in a drawer. 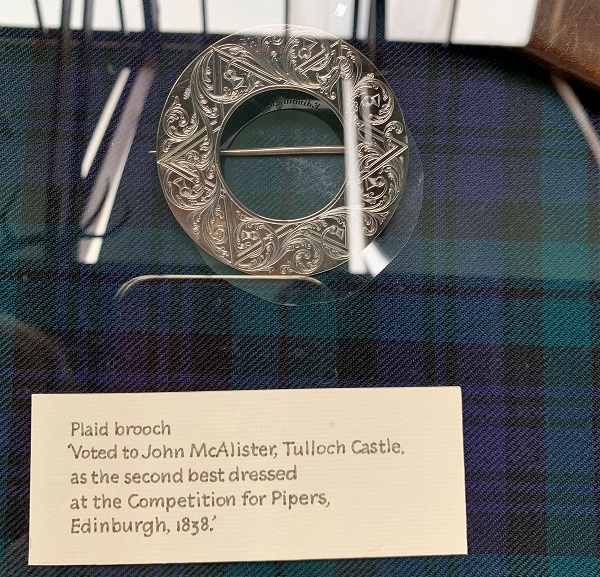