“Stop that, Barney!” says the patient llama-handler, as the frisky creature continues to make mischief by knocking the top off a metal post with his head.

We’re standing in a barn in the North Yorkshire Dales, waiting to discover which, from a selection of  adorable llamas and alpacas, will be our partners for an afternoon trek. According to the website for Nidderdale Llamas, Barney is “always up to tricks” but “you cannot help but laugh at his antics”. On the treks “he needs a firm hand to stop him from eating everything in sight.”

Dougie and I glance at each other. We just know the two girls running the session are going to choose him as Barney’s ideal mate. Not long after, Barney and Dougie are inevitably paired up.

Meanwhile I’m standing quietly with my mask on and, having forgotten to change my sunglasses for normal specs, I must be very hard to fathom. The team at Nidderdale Llamas decide I should accompany Trevor. The website describes him as “a very snooty chap” so maybe that’s how they see the inscrutable me. But Trevor is also “very sensitive”. His trekking companion should be a confident adult  to “reassure him when needed and admire his handsome good looks”. I can do that.

Once this unusual speed-dating operation is complete and the rest of our small group has buddied up, we’re ready to head off around the stunning countryside of Nidderdale. Dougie and Barney seem to have bonded already – they both smile for the camera.

I’m told that my llama, Trevor, likes to lead the group so I have to accompany him at the front. Everyone else finds their own place in the pecking order. My job is fairly easy – Trevor is a pretty chilled animal.

Dougie, however, has his work cut out keeping Barney on task. We’re instructed not to let our llamas eat the grass on the trail. There will be a short break mid-walk for a nibble in a field where they can be sure of its nutritional quality. Barney has other ideas so his head keeps darting to the ground, requiring frequent though gentle tugs on his rein. Barney then spots some of his pals or rivals (who knows!) as we walk past a field and he’s spoiling for a fight like The Cowardly Lion from The Wizard of Oz. “Put ’em up!”

Dougie decides on a new tack and takes on the role of The Llama Whisperer. I can hear him behind me shooting the breeze with Barney, calming him with whispered words about South America and Peru in particular, in an effort to remind Barney of his homeland.

Soon we settle into a gentle rhythm as we walk through the fields and a short stretch of road, stopping only to pull in for the occasional car. The drivers seem unconcerned by our presence: it must be pretty normal for the locals. The sun is glorious in a bright blue sky, the quiet of the afternoon only punctuated by the splashing and plopping sounds of llamas doing what comes naturally. Thankfully there’s no need for us to scoop the poop which is just as well as I don’t have a big enough bag.

Half-time refreshments of fresh grass for our new pals, a few more bladders emptied and we head back up to the farm, Trevor insisting again on playing Follow My Leader.

When we eventually have to give up our llama friends we’re bereft. We’d only chosen a short afternoon trek but this little insight into the world of llamas and alpacas has been quite incredible. Who would have thought a couple of non-pet owners would become so attached to these woolly creatures. We even buy fridge magnets with photos of Barney and Trevor on them as a memento of our day – what a pair of softies we are! 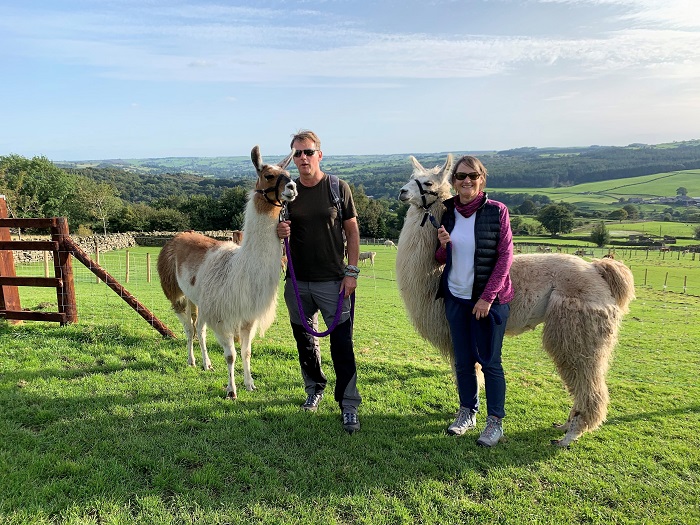 If you’re interested in finding out more about Nidderdale Llamas, all the information about the treks is online here: www.nidderdalellamas.org.   You can join a trekking group on your own, as a couple or as a family.  We visited in September 2020, during a short break to Harrogate, and it was one of the best experiences we’ve had on our travels. We talk and laugh about it endlessly. Every time I go to open the fridge door now I see Barney and Trevor gurning at me and that, quite frankly, is a treat to behold.