The lyrics of the Madness song, ‘Wings of a Dove’ are very appropriate for my new outlook on life, blogging and everything. Taking time for pleasure could be my new mantra. And doves are certainly a huge feature of our lives at the moment.

We’ve had collared doves in the garden for many years. Usually they make a half-hearted attempt to make their spindly nest in the apex of the garage above the light. More often than not, the twigs end up on the ground and I’ve assumed they’ve found a better location in a tree.

This year, after another aborted garage construction, they found the perfect spot: a sheltered area of our front porch. The nest had a proper brick base, it was protected from the wind and they didn’t seem too bothered by our presence as we walked past the hall window on our way up and down the stairs.

Collared dove parents are quite a team. They take turns to sit on the nest for a couple of weeks until the eggs hatch. It wasn’t long before we saw a little head poking up from its bed. We only had one baby (or squab) so we called him Suggs in honour of the Madness lead singer.

In the days that followed Suggs grew bigger and fluffier, fed with crop milk from an attentive Mum and Dad. One morning I came down to put the kettle on and saw little Suggs on the patio outside the living room window. As I peered through the window at the wee mite, he jumped up onto the window ledge, said his goodbyes and flew off. I spotted him over the next day or so, sitting on the garage roof, still being fed by his parents until they decided he could go it alone. 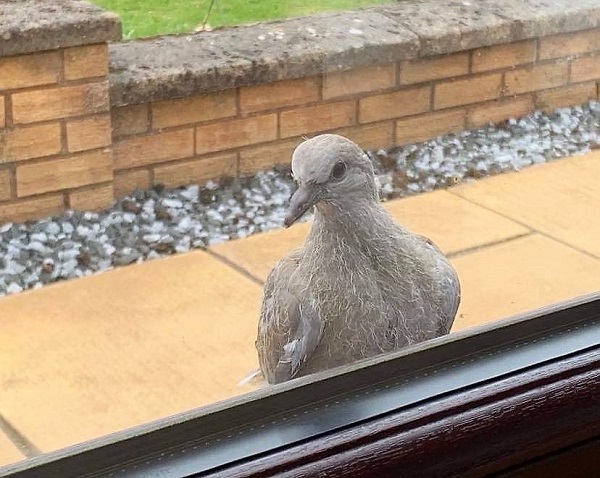 We left the old nest in the porch for a few days and, despite it looking dishevelled and covered in poo, the doves came back. They settled themselves into the nesting routine and this time they had two babies to watch over.  We named them Prince, as a nod to his song ‘When Doves Cry’, and Princess, as we’d run out of ideas. 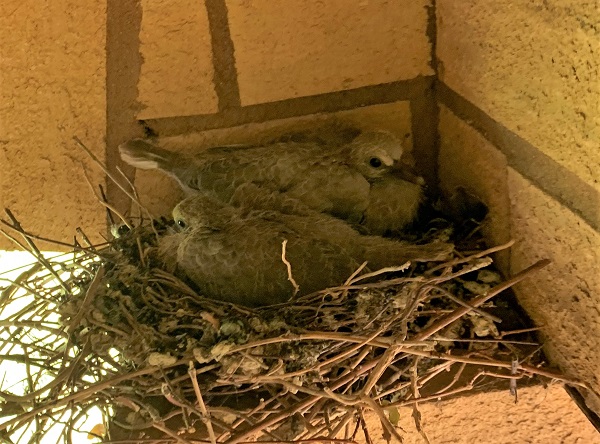 Prince and Princess grew exponentially which did make me think we should have called them Whitty and Vallance or Alpha and Delta. In the middle of last week they also flew off but didn’t have the good manners to say cheerio.

The empty nest was honking. I think it was only being held together with poo. We left it alone for a couple of days but then decided to take it away and clean up the porch. You would think by this time the doting doves would have had enough for the season but no, they started looking for a new nursery… our satellite dish.

Their efforts this time were woeful. They tried to place twigs over the slim bracket. A breath of wind and they fluttered down to the ground. Dougie was becoming quite anxious as he really didn’t want to have any interference with our telly, not with the Euros on at the minute. So he took it upon himself to lend a helping hand.

First he used a pole to knock off any remaining twigs from the satellite dish then he gathered the detritus from the ground to fashion his own nest. He poked and weaved the sticks in and was able to replicate the dove’s usual flimsy affair.

He placed the new nest on the ledge of the porch, in the same position as the original one. In less than two minutes, the doves had taken up residence. I have no idea how they knew what Dougie had done but having a clean, purpose-built nest for the next clutch of eggs was a welcome relief, I’m sure.

So Bill Oddie/Dr Dolittle/Chris Packham is very pleased with himself. Indeed, he’s puffed up with pride.