Sunday morning – we were needing a lie-in. There’s only so much excitement a middle-aged couple can have before the idea of a nice cup of tea takes precedence over everything else. Thankfully most of the shows for adults tended to start from lunchtime onwards so there was no rush. My husband, however, had other ideas. He was keen to fill in the gaps between pre-booked events. The Fest magazine, which lists shows chronologically, proved a great partner to the official Fringe brochure for working out what was on, when and whether we would enjoy it. The proximity of our apartment to the main Edinburgh Fringe ticket office meant that Dougie kept nipping out all morning to ensure we bought tickets before they sold out. If anyone had watched this strange activity it would have looked like he was slinking off to put a bet on or meet some shady character to do a deal. Still – it kept him happy. 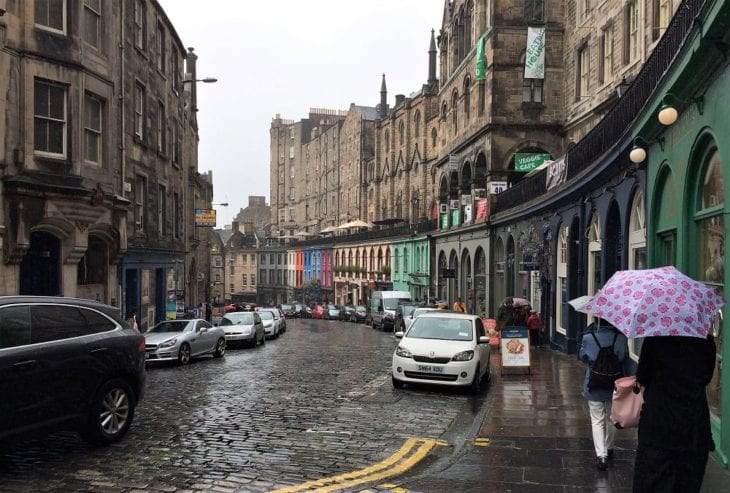 The predicted Scottish rain made an appearance just as we headed out for Sunday lunch with Dougie’s cousin, Gail and her partner, Allan. I’d booked a table at Howies, in Victoria Street, more by luck than judgement, prodding around on Google Maps the previous week. I chose well. It was such a warm, friendly place with a great buzz. The lunchtime menu was a steal at £11.95 for two courses. We were so busy chatting that I’m afraid I took no photographs but I can vouch for the fish of the day (hake) and the casserole of the day (beef flank) plus the banoffi pie and the dark chocolate cremeux for pud. Gail and I supped  Rock Rose gin from Caithness with Scottish Walter Gregor tonic. It was great to meet up with family, escaping the Fringe chaos for a little while. 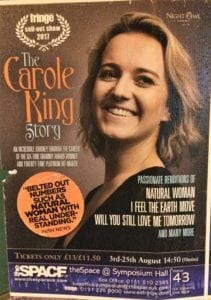 Our first Fringe show of the day began just before 3pm. The Carole King Story was being performed at the Symposium Hall, in the Surgeon’s Quarter. This is an extraordinary part of the Old Town. The location of the Royal College of Surgeons of Edinburgh since 1503, Surgeon’s Quarter has grown in size and remit as it now includes hospitality: a top class hotel, Ten Hill Place, and a coffee shop, Café 1505. We sat in the most comfortable padded seats in this medical lecture theatre, everyone having a superb, uninterrupted view of Phoebe Katis at the piano. Phoebe has the voice of an angel and this “show-umentary” (live piano, singing plus video screen documenting the life of Carole King) was just sublime. I bought a CD of Phoebe’s own original songs after the performance and hope she can emulate the success of Carole King as much as she can replicate her voice.

From the sublime to the ridiculous. It’s a cliché but in this case very true as, after a quick caffeine stop at Café 1505, we headed to the Pleasance Dome for the Cambridge Footlights sketch show, Pillow Talk. I wasn’t sure what to expect. The young students had big shoes to fill and the reviews had been very mixed. All I can say is – we loved the silliness of it all from the well-observed PTA meeting to the Bond girl hitting back at 007s pick-up lines. I’m going to return to this review in a few years’ time and see how this talented lot are doing: Ashleigh Weir, James Coward, Megan Coslett, Christian Hines and Will Bicknell-Found.

We weaved our way through the crowds again, this time hindered by two groups of silent disco enthusiasts on either side of the main street, conducted by a man in blue and yellow lycra, all singing along to The Proclaimers, “500 Miles”. It’s the funniest thing, watching people who are so engrossed in the music they can hear through their own headphones, that they lose their inhibitions as they sing loudly and dance without embarrassment. Only at the Edinburgh Fringe… 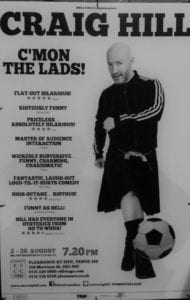 The rain increased just as my umbrella decided to fall apart. We hadn’t brought raincoats (what fools!) so arrived, thoroughly soaked at the Edinburgh International Conference Centre, just in time for comedian Craig Hill. Dougie had bought tickets for this show as the poster hinted of a laddish, football-oriented show from an Alan Shearer looky-likey. We couldn’t have got it more wrong. Craig Hill burst onto the stage and twirled like a ballerina in his kilt. There was no mistaking Craig was gay and proud and very, very funny. He celebrated his sexuality with some sharp observational comedy and the remainder of the time mercilessly laid into his audience, who lapped up very minute. Latecomer Kate, a sculptor originally from Guildford in Surrey and her partner, a sheet-metal worker from Falkirk, were comedy gold.

As we left the theatre, Craig was at the door to thank everyone individually for coming – a lovely touch. He looked at me, twiddled my scarf and said, “Ooh, very bohemian”. I took this as a compliment until I made my way to the ladies loos and saw myself in the mirror. My hair, having now dried off, was sticking out at very odd angles. I looked an absolute fright. Or bohemian, if you’re being kind.

It was 8.30pm and the night wasn’t over. We managed supper at the centre, just before it closed, appealing to the good nature of the staff to scoop up the last portions of lamb tagine and jackfruit Thai curry. I’ve never had jackfruit. In fact I didn’t actually know that’s what it was. It just looked good. I’d have it again, it was delicious. Well-fed, we were on the march again across town to the Pleasance Courtyard, part of the university sports department I think. In one of the many rooms here we had tickets for a cabaret show, Margaret Thatcher, Queen of Soho. Like most of the ticketed shows at the Edinburgh Fringe, no seats are reserved so people tend to queue up a little beforehand. Occasionally the stewards are quite strict and they insist everyone fills up from the front rather than choose where to sit. Can you see where I’m going with this? Yes, Dougie and I were seated bang in the middle of the front row.

Maggie was sensational with superb legs, smart suit and handbag. The focus of the show was the divisive Section 28 of the Education Act which meant that it was surprisingly political and thought-provoking. But the Iron Lady did take a fancy to Dougie. She asked me if he was my boyfriend. When I replied, “Husband”, she dismissed this and announced, “That’s not what his profile says on Grindr!”

Another late night, another tired walk through the streets, looking at the posters, peering along the narrow closes. 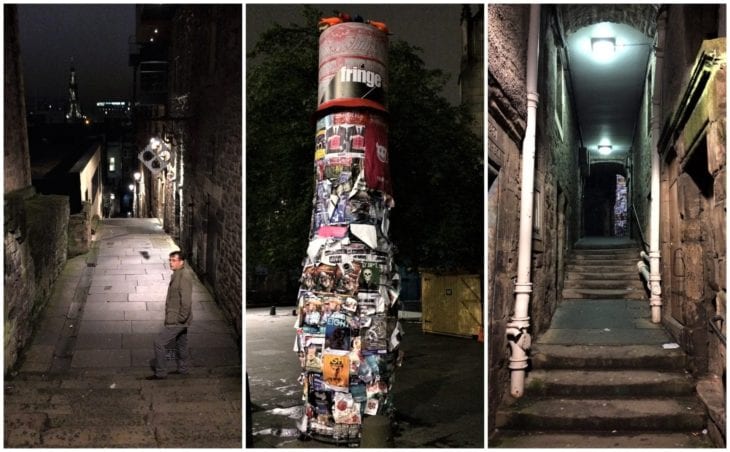 Indeed I did. Our apartment was next door to a wonderful little bar/restaurant, The Devils’ Advocate. Whisky beckoned for me in the form of a Leaving Leith cocktail which included Jonnie Walker Black Label, Aperol, Pilot Blond cordial and lemon. A seemingly bizarre set of ingredients but a very moreish result. Dougie, who adores whisky and has a cupboard full at home, had a beer. 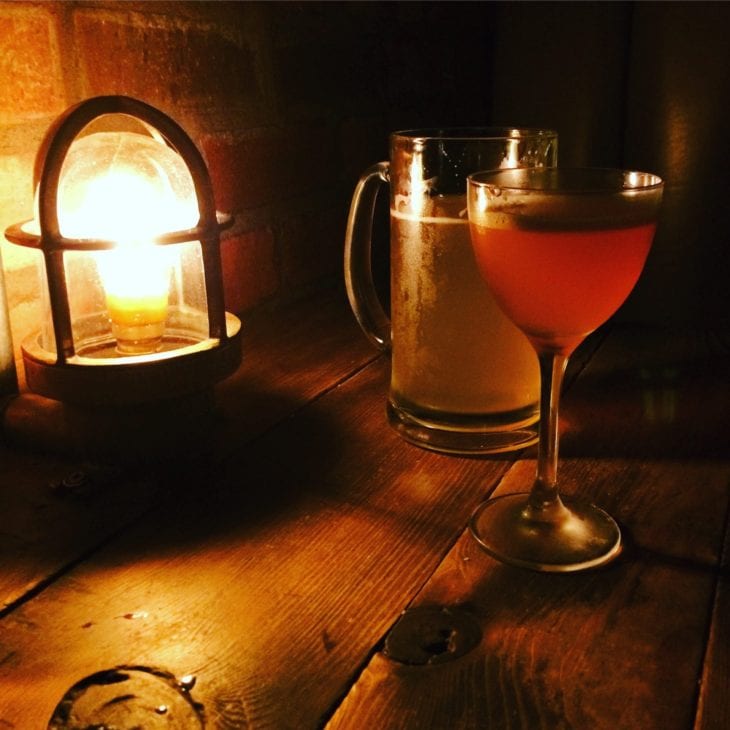 Surely this must be the end of our Edinburgh adventure? No, my friends, there’s more. Stay tuned for celebrity spotting, a top impressionist and a very spectacular Tattoo.