We didn’t plan it: a week and a bit of theatre-going just, sort of, evolved. This House in Cambridge was booked because Dougie and I were taking our car in for a service and decided, for once, to make a night of it and stay over. A birthday present for our son, Rory, and a great excuse for a parental visit to Coventry, added The Play That Goes Wrong into the mix five days later. Finally, as we were already planning to attend the University Boat Race, why not throw in another night at the theatre and get tickets for Mary Stuart.

Three very different productions but equally impressive. As they are all either on a UK tour or about to embark on one, let me give you an idea of what to expect. 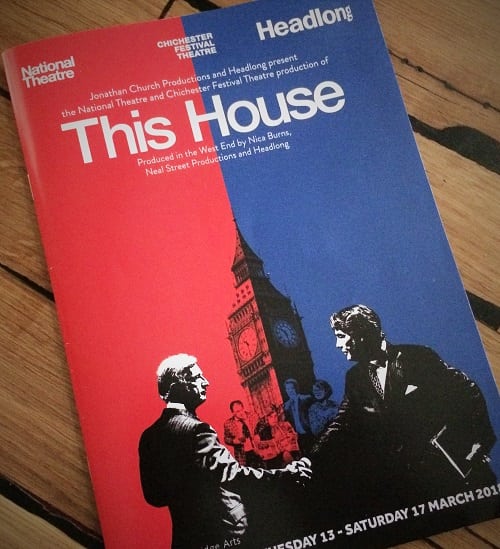 It probably helps if you were around in the 1970s to appreciate the full impact of this glorious account of the political machinations between 1974 and 1979. I may have been a child at the time but the power cuts, three-day weeks and Mike Yarwood on the telly, keep this period of government very fresh in my mind. Having said that, history does have a habit of repeating itself so younger audiences will see little has changed as they watch the politicians desperately fight for every advantage as they seek to retain or gain power.

The action is set in the two opposing whips’ offices so the audience don’t meet the Prime Ministers or Leaders of the Opposition. Labour have just come to power and are initially excited by this success, bouncing on the adjustable office chairs and looking awkward in their ill-fitting suits. But it’s a hung parliament so every vote is vital.

The language is vicious and coarse but riotously funny. The pace is frenetic, with actors playing several roles, announced by the speaker as their constituency name as they come onstage. The occasions where the action slows gives added pathos to those scenes: the desperately ill MP chivvied into Westminster to ensure his vote will count on a crucial bill; the unswerving MP for Coventry South West, slowly counting out each coin of her fine, having been arrested on the picket line in a dispute for union recognition for female workers.

This House  was first performed in 2012 at the National Theatre. It was revived in Chichester in 2016 and returned to London, to the West End, later that year. It’s currently enjoying success on a UK tour. It’s in Edinburgh this week and then moves to Nottingham, Birmingham, Salford. Plymouth, Norwich, Great Malvern, Guildford and Sheffield. It’s an absolute belter of a play with superb acting performances from across the house. 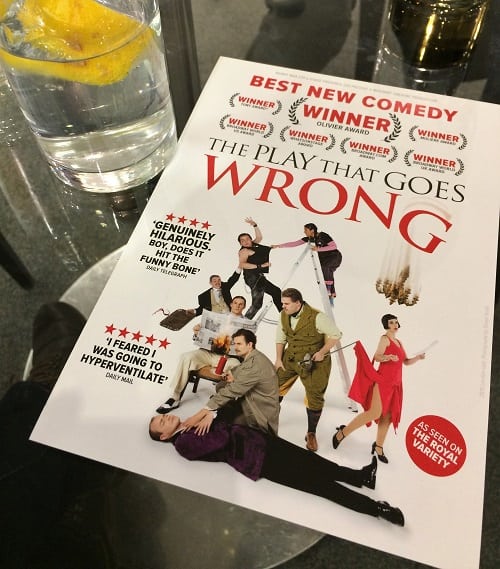 The Play That Goes Wrong

I’ve wanted to see this Mischief Theatre production for some time. Dougie and I loved their more recent play, A Comedy About a Bank Robbery, which we saw in London, but we hadn’t managed to see the original play that has brought this fledgling theatre company huge success around the world.

Cornley Polytechnic Drama Society are putting on Murder at Haversham Manor and nothing goes right. The set falls to pieces, props aren’t where they should be and characters forget lines so chunks of dialogue are repeated endlessly until the script is remembered. As an Am Dram regular, I was helpless laughing at all the excruciating mistakes that are well-known to me but thankfully don’t usually happen at the same time.

The Play That Goes Wrong is a masterclass in slapstick comedy. Ideal for the whole family, no swearing or blue material, it just tickles your funny bone from beginning to end. It is still running in the West End and on Broadway but it’s also on a UK tour, ending in September. If you’re after belly laughs and plenty of clever nonsense, you can see the play all over the country from Cardiff to Cambridge, Bradford to Bristol and Liverpool to Llandudno. 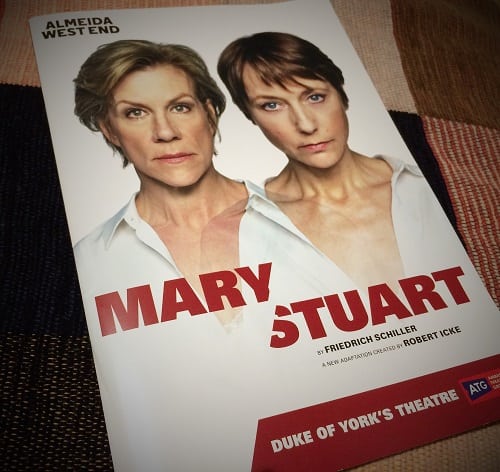 No belly laughs here, this was heavy duty theatre: time for my serious face and sombre disposition. And yet, in this three-hour long adaptation of Schiller’s original German play of 1800, there were plenty of wry smiles to be had. Just as in This House, the relevance to today’s society is very apparent. Mary, Queen of Scots, is imprisoned in Fotheringay Castle and Queen Elizabeth I has to decide whether she should be executed or not. Elizabeth is surrounded by officials giving her the ‘best advice’ whilst trying to gauge the mood of the people. Mary is being manipulated by her supporters just as she tries to manipulate them to regain power.

Juliet Stevenson and Lia Williams play both roles of Queen Elizabeth I and Mary Stuart: the decision as to who plays which Queen each night rests on a simple toss of a coin. Shown on screens at the side of the stage, nobody onstage or in the audience knows which way the coin will land. This adds such a spark to the opening scene that everyone is quite breathless with anticipation. I’m in awe of the two actors, not knowing which set of lines they will have to follow until the very last minute.

On the night we saw the play, Juliet Stevenson played Mary and Lia Williams, Elizabeth. They were both dazzling and, despite me imagining them the other way round, I can’t now picture it any other way. I presume people who saw the roles swapped will think the same.

Don’t imagine this is just about the two main characters. The rest of the cast are magnificent. Burleigh (Elliot Levey – my favourite) and Leicester (John Light) wheedle their way into favour and retreat, snakelike, so as not to be blamed. Others, Talbot (Michael Byrne) and Mortimer (Rudi Dharmalingham) show true passion in their support of their chosen Queen.

Mary Stuart remains in London until 31 March 2018 and then heads off (excuse the pun) on tour in Bath, Salford and Cambridge. If you’re lucky enough to get tickets, it’s worth looking for seats near the front. In the third row of the Duke of York’s Theatre, I was mesmerised by every anguished expression and each desperate breath. It’s one of those experiences I know I’ll never forget.