Home  >  Blog  >  Cheer your afternoon with a macaroon 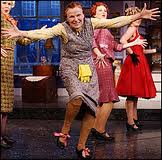 The older you get, the harder it is to learn lines. That’s a fact which is proving all too true as I get to grips with the part of Mrs Overall in Spalding Amateur Dramatic and Operatic Society’s production of Acorn Antiques, The Musical. It’s bad enough knowing I have to fill the shoes of the gloriously funny Julie Walters, aware the audience have a clear picture in their head of the character and how she should be played. I also have to make sure I spend at least some part of every day looking at my lines so that they hopefully become second nature by May.

I decided early on, having been given this role, to avoid fiddling about with it. So I am watching the DVD of the musical and blatantly mimicking JW; her voice, actions and comic timing. I have looked carefully at her stoop and realised it comes as much from the knees as from the back so have adjusted my stance accordingly. Her arms dangle a lot, her shoulders are hunched. She doesn’t always speak in a Birmingham accent: it rises and falls, it drifts into ‘posh speak’ at times, she squeaks at some parts and is quite gruff in others. I keep saying the lines over and over, trying to get them just right. I’m even wandering around the kitchen at home with an old woman’s gait. Daniel Day-Lewis has nothing on me.

What does help is the fact that the script, written by Victoria Wood, is stuffed full of very funny lines. I have a fair few of them and, if they are said with the right cadence, at just the right time, then I should have a chance of doing them justice. There are gems such as:

“I was giving the postman a mouthful of something tasty by the scullery door, and he filled me in very thoroughly”.


And, of course, it being a musical, I have to sing. Mrs Overall has one hell of a solo, ‘Macaroons’, which is fast-paced, long and rather rude. The gist of the number is that the world should stop using drugs, alcohol and sex to deal with stress but eat lots of cake instead: “Bit of Bakewell tart, lightens up your heart”. After the intro, the song has three distinct parts, each commenting on a celebrity and their propensity to indulge in things other than carbohydrates.

This is where I need to work hard to remember the words and, as many of the lines are rhyming couplets, I have to be careful not to jump a few and miss out a whole chunk. So I’ve come up with a solution for my ageing brain. I’m creating a ‘mind map’ which is creating images in my head to match the words. Ozzy Osbourne, according to the song, is ‘a stranger to the benefit of oven bottom cake’. As the next line urges him to drink milk and eat muffins, I have created a picture of the man ensconced in a comfy chair eating said cake and then moving onto the muffins and milk.

Our musical director has been very helpful to me with my song, going through the sheet music and pointing out the symbol called a ‘fermata’ which indicates a pause when I sing without accompaniment so I can take a breath and the band will wait until I’m ready to go again. He uses the word ‘vamp’ to explain this – the band will vamp apparently until I remember the next verse. They could be vamping indefinitely.

As you can imagine, the show is an absolute joy to do. We have a great team; director, MD, producer, choreographer and all the backstage crew are making the rehearsal process a real pleasure. The cast are having such a laugh, especially as everyone has such cracking lines. One of the main characters, Miss Babs, has some corkers so let me leave you with this one, said in a wonderfully plummy voice (just like Celia Imrie, who played the role originally) as she picks up the phone in the antique shop: