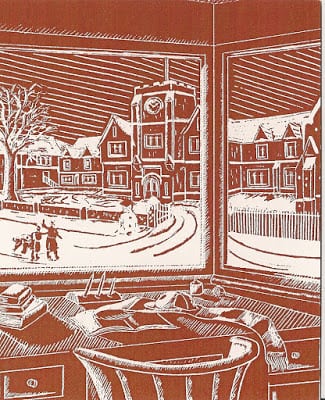 In 1949, when my dad was 15, he designed the card above which was selected by his school, The King’s School, Peterborough, for their Christmas card that year.

I remember seeing the card quite often over the years, as it lay amongst old letters and photos at my parents’ house. When Dad died in February and I began to write up his memoirs as a blog, Memoirs of John Michael Grinsell, I hunted it out again. It always fascinated me how intricate a design this was, presumably using scratch art technique to carve the picture into the card, picking up the white background underneath? [although from comments below it would seem it’s more likely a lino cut]

I could spend hours looking at the detail in the card: the curve of the chair, the architectural precision of the school building and the three little children playing in the snow. Hard to believe a young lad, the same age as Rory is now, laboriously etching out the scene.

Mum and I decided we would both like to use the card for our own Christmas card this year so she had them re-printed locally. I now have a large box of them to send out to friends.

I think writing my cards this year is going to be rather special.

Friday, 9 December: I think I have an answer as to how the card was created. My father’s sister, Betty, was speaking to my mum earlier and she remembers Dad working on the card at home: it was a linocut. She remembers him sitting working on the design for many hours to create the detail you see above.