Home  >  Blog  >  Mum’s gone to the Spalding Midsummer Ball
It’s that time again. Our annual big night out where we join our friends to raise money for good causes and get very merry in the process.
The Spalding Midsummer Ball raises money for Macmillan Cancer Support, Action Medical Research and, this year, AgeUK. After last year’s sensational ‘Moulin Rouge’ night, the committee chose the very apt ‘Best of British’ theme. An excuse for everyone to get a second-wearing out of the Union Jack waistcoat bought for the Jubilee celebrations. There is no obligation to dress up for the theme but people did seem to enjoy adding something patriotic to their outfit, whether it was jewellery, bow-ties or going the whole hog with a Union Jack frock. I didn’t wear anything red, white or blue, choosing a lime-green dress I last wore in 2008 (recycling again). Dougie made up for it by sticking, understandably, to his Scottish roots with his kilt and all the regalia that goes with it. 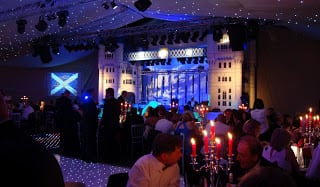 The venue, in essence a huge functional shed, Springfields Events Centre was transformed into a fabulous, glittery room with a huge Tower Bridge at one end and a cocktail bar at the other (with creations such as The Strand and Punk Rocks). Leading to the main room was a corridor filled with clever displays showcasing British sport. We also had our own Queen Elizabeth II looky-likey for the night who posed for photos and said grace before the meal.

She wasn’t the only queen in attendance. The entertainment during dinner came from The Globe Girls who were gloriously camp, high-kicking their way through numbers from Chicago and executing eye-watering splits which led to a discussion on our table as to where they hid the crown jewels in such tight leotards. Dougie reckoned this was yet another good example of the many ingenious uses for gaffer tape.
After the meal and the auction, a very authentic Beatles tribute band took to the stage, followed by the Jonny Spangles Roadshow disco who took the party-goers through until 2am.
My favourite part of the whole night, as always, was the £10 a go Gift Trees. Our gift tree prizes have been mixed over the years; usually worth more than the £10 paid, they have ranged from rose bushes, a giant teddy bear to a car-cleaning kit. I think our tickets this year nabbed us two of the best: a bottle of champagne in a Union Jack jacket plus a gorgeous ‘Candy Bling’ friendship bracelet donated by the owner of Spalding’s very chic jewellery store, number one, and worth far more than the £10 paid.  I think all the ladies at the ball should be thanking her for organising the brilliant table gift of a Links of London 2012 Team GB band.
Some of our friends had a very ‘coals to Newcastle’ experience with the gift trees this year. One hairdresser won a restyle at a competitor’s salon, an accountant with a local pie and sausage manufacturer won a voucher for a hamper of their products and the garden centre owners won an orchid. One friend was very puzzled as she looked at her gift: a four-inch silver-plated item with round balls at either end, she did wonder if it was an upmarket marital aid. Apparently it was a baby’s rattle.
The food this year was delicious: asparagus or crab and prawn starter, roast beef and Yorkshire pudding, followed by apple pie with whisky cream or summer pudding. As I was designated driver, can I also congratulate the team for providing fantastic non-alcoholic cocktails.
What’s the theme next year? Put my name down as I’m coming anyway.