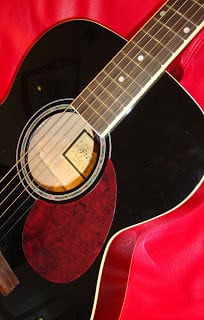 I’d always wanted an acoustic guitar. As a teenager I played my dad’s classical guitar for a few years, mainly strumming some chords and singing along to myself. I never really progressed beyond Streets of London, Leaving on a Jet Plane, Vincent (the starry, starry night song), Barbra Streisand’s Evergreen and the straightforward ones from the Beatles Songbook.

I chose songs with easy chords: Ds and As were good, E minor and D7 a joy. Anything involving holding down all the strings with one finger (there’s probably a word for that…googles it….barring, that’s it) I found really difficult. Classical guitars have a wide neck; an acoustic guitar would be slimmer but, with all metal strings, tougher on my fingers. I never did buy my own one. In the end I gave up on learning to play and persevered with my singing instead.

As parents, Dougie and I were keen to encourage Rory to learn a musical instrument but he was having none of it. I didn’t want to force it, though wistfully suggested that he had such lovely long fingers he would be marvellous playing the piano or the guitar. Nothing, Nada. That is, until he got the chance to own an old drum kit from my niece. Drums? That wasn’t what I had in mind at all.

That was a few years ago and, every Wednesday since then, Rory has religiously gone for lessons. He sees a wonderful old chap called Bernie who used to play in showbands. Rory says he’s a legend. I ask if he would like to have lessons at school where he could take exams in drumming. No way, says my son, I want to play for fun, for myself. So I shut up and let him learn the old-fashioned beats, the rhythms, the paradiddles and rolls. I can’t sing along. I suspect Rory is pleased about that.

Recently I walked past a music shop when I was shopping in Boston (Lincolnshire) and decided there and then to do something I should have done years ago. I bought myself a brand new, very shiny, acoustic guitar. I brought it home. I lovingly picked at the strings, found my old sheet music and began to play. Rory came into the room and said the new guitar was awesome. Could he have a try?

I haven’t seen it much since. In between revising for his GCSEs Rory picks up the guitar and experiments with the notes and chords. He skypes his friends who play guitar and they have started to teach him; pals are popping round to have a go, sometimes with the drum being played to accompany them. He has found instruction videos on the internet from which he is learning new tunes: Wonderwall by Oasis, Ivy and Gold by Bombay Bicycle Club, Seven Nation Army by The White Stripes.

I think my new guitar has found a new owner. But I don’t mind. Not one little bit.