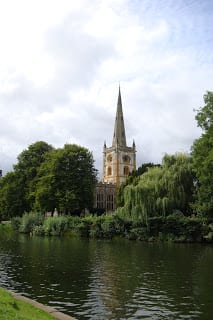 Mum did go to Stratford-upon-Avon, but it was in 2009 before I’d started blogging. I didn’t write a diary at the time to type up at a later date but memories of a fantastic family holiday came flooding back when I was sent a press release last week about some new hotel openings for Premier Inn.

One of the new hotels is Stratford-upon-Avon North Waterways, due to open on 20 February. It looks like an ideal location, situated on the banks of the canal, a few minutes from the railway station and a short walk from the historic centre of town.

As a destination for a family break, you can’t beat this part of the UK. The town itself is picturesque with plenty of tourist attractions; many, naturally, linked to the town being the birthplace of William Shakespeare. In fact, you’d be hard-pressed to get away from The Bard here and in the surrounding countryside.

When we visited, Rory was 13, the ideal age to see a proper Shakespeare performance. We booked tickets to see Julius Caesar at the RSC (Royal Shakespeare Company) and he certainly lapped up the blood and gore. Since our visit, the Royal Shakespeare and Swan theatres have been updated so the experience should be even more inspiring. Pity they aren’t doing the Scottish play at the moment as that would have been perfect for an imminent GCSE kick up the behind.

Further afield from Stratford itself is the historic Warwick Castle which has to be one of the best places to take children if you want to fill their minds with history without them noticing: the Princess Tower, Dragon Tower and Castle Dungeons can’t fail to excite. I remember when we visited there was a brilliant demonstration by the castle archer who took his audience back to the Battle of Crecy when the English longbow triumphed. Living history at its best. 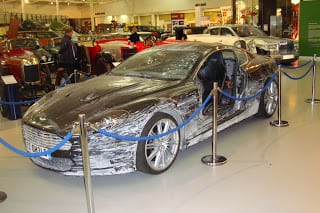 Or how about the British Motor Museum, a few miles away in Gaydon? This was a real treat for the boys. A huge array of cracking cars, lots of children’s activities and outside the main museum there’s a Land Rover off-road experience, a miniature roadway for children ages 3-7 and even an introduction to driving for 15-17 year olds. When we visited in 2009 they had one of James Bond’s Aston Martins which had featured in Die Another Day. The day had definitely arrived for this one.

Finally, if you fancy a decent bite to eat by the river in Stratford, can I suggest The Encore. I can only vouch for what it was like in 2009 but the food was good, in cosy but chic surroundings and, most importantly, it made me smile, because of the doors in the ladies’ loos. Apologies to the lady using the facilities at the time who may have been slightly startled by my flash going off…. 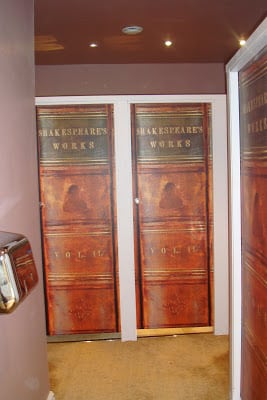 Premier Inn have offered me a free night in one of their hotels. Quite fancy the one in London County Hall, as have heard good things about it. Any other suggestions? Dougie and I think we may have a short break in March when Rory is in France, doing his reciprocal exchange visit.