Home  >  Blog  >  Whistling Carols and yet another round of Arthritic Charades

We did that thing couples do at Christmas; agree not to buy each other anything and then worry as the 25th approaches that someone is reneging on the deal. I realised by the middle of last week that, for once, neither of us had cheated, but this seemed too sad for words to be sitting on Christmas morning with bugger all to open. As Dougie was up to his ears in patients, many of whom were the worried well who “just have a bit of  a sniffle but thought I’d get checked out before Christmas, Doc”, I decided to do the decent thing and, as well as buy him some Armani smellies and a few DVDs, purchased some top-of-the-range ghd straighteners for me. I knew Dougie would be pleased he’d ‘bought’ me them as my current straighteners have no automatic cut-off and, in the long run, knowing my propensity for leaving them switched on, it would be cheaper than dealing with the aftermath of the house burning down. I wrapped them up on his behalf and wrote myself a tag, “To my Darling Wife, I just knew these would be perfect for you. All my love, your thoughtful husband, Dougie xxx” 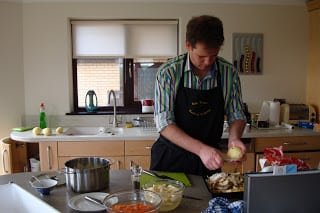 The present-opening session on Christmas morning was a success: both Dougie and I vocalised our surprise at his generous gift.

Whilst Rory and I played with our new toys, Mr Organised filled two recycling bags and set to with the veg preparation for dinner. Once he has his pinny on he becomes so Masterchef, it’s uncanny.
“So tell us what you’re doing now, Doug?”
“Well, Greg, I’m peeling the potatoes”
“And what’s your timing on that, Doug?”
“About five minutes, Greg”
“Do you think you’re on track?”
“I think so. Just have to up my game a bit; this is my dream and I want to show everyone what I can do”
“Looks laa-ve-ly, Doug”
“Thanks, Greg”

Prep over, and the consumption of pink fizz affecting his timings somewhat, the chef had a break to watch some Christmas special Sky Sports thing while the sous-chef took over the reins and annoyed everyone by singing ad nauseam the opening ah-ah-ah-ah-a-a-ah bit from the Military Wives Choir’s Wherever You Are song.

The inlaws, George and Emily, arrived at 2pm with the ‘big bag’ which has accompanied them to every Christmas Day at ours since Rory was born. Always dubious about what’s going to come out of this bag (not surprisingly after previous disappointments of Chelsea football socks and a belt buckle with a wolf on it) this year they played safe with John Lewis white bath sheets. Dougie entertained them with some obscure TV and film quiz from a tin we’d bought Rory for Christmas. The questions were all American and they struggled with questions about the name of the fish in Disney’s The Little Mermaid, when Emily had been hoping for some Emmerdale topics. 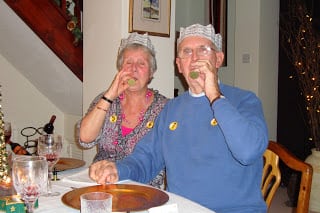 The meal was “a triumph, Doug, though the turkey may have been a little overdone”. Dinner entertainment was provided by some musical crackers we’d bought. In each cracker was a numbered whistle, eight in total. As conductor, I had a baton and notation for whistled carols. Not having enough people for all eight whistles, each person got two whistles each, which didn’t bode well. The First Noel (321345 678765) was, quite frankly, a car crash, not helped by Emily putting near enough the whole whistle in her mouth so that her 5 and 6 notes were inaudible. She then proceeded to laugh so infectiously, no-one was able to purse their lips to make any useful noise at all. Deck the Halls was a tad too fast in the la-la-la bits but we had far more success with a sedate rendition of Jingle Bells possibly because there were none of George’s 7s and 8s and lots of Rory’s 3s. As Rory was the only one able to produce a pleasant sound from the whistle, I tried to choose songs with plenty of 3s and 4s in them. O Come All Ye Faithful was so painful, I’d suggest it as a more effective method of torture than waterboarding. 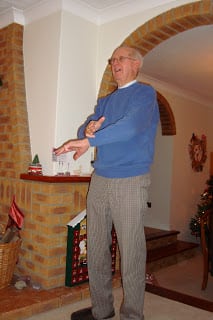 We retired to the living room for Christmas pudding on our laps and a few rounds of our favourite family parlour game, arthritic charades. As in previous years George was unable to indicate how many words because of his crooked fingers so, to avoid us shouting out “Three and a half?” we allowed him to speak that bit. After all these years he still doesn’t get the idea that this is a mime game and seems at pains to find props. So he nearly disrobed for The Naked Civil Servant and had us all having to uproot from our comfy chairs to see him go into the hall to demonstrate Stairway to Heaven. We were stumped with his charade of Withnail and I, mainly on account of George thinking it was Withnail and One but he topped this with his constant counting to seven as a ‘clue’ for the second word in Perfect Day: “there are seven days in a week!” he exclaimed after we’d given up.

Thankfully we packed them off home once George had snored his way through most of the Peter Kay DVD. We ended the evening watching The Inbetweeners movie: I hid behind the cushion for most of it. Rory, completely unfazed by his parents watching him with it, roared with laughter and Dougie, rather taken with a whole new supply of rude teenage slang, tottered behind me as we staggered up the stairway to heaven, wondering hopefully if, perhaps tonight, the pony needs feeding….