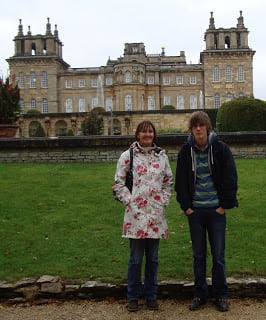 After the disaster of Bicester and the success of  ‘going for a walk’, our second full day in the Cotswolds greeted us with pouring rain. Undeterred, we donned sturdy footwear and raincoats and drove off to Blenheim Palace. These places are always pretty expensive when you just turn up. As Dougie handed over fistfuls of notes to the man in the booth, I bemoaned the fact that we have a drawer full of Tesco vouchers which could have paid for the whole day in full, if only I’d had the nous to plan in advance. Knowing me, they’ll be out of date before I have a chance to spend them.

It was still tipping it down as we trudged from the car park to the Palace but, once inside, it was warm, welcoming and there was a free guided tour (ok, after the amount we paid, let’s say ‘included’). We were escorted by a wonderfully enthusiastic chap; part Ronnie Corbett, part Brendan from Coach Trip. We learned a considerable amount about the Marlborough family,Winston Churchill and the relevance of specific items in the State Rooms. Hands up everyone who goes round these rooms in stately homes on their own and can only really comment, “Nice tapestry”?  That’s usually us and we never learn very much.

This tour was followed by a computerised presentation about the history of the house and its family. It’s quite a laugh actually, with moving dummies, one of whom was the King’s mistress sitting up in bed while her lover was supposedly in the wardrobe. Can’t imagine how parents might answer a child’s question on that little vignette. There were a few educational computer screens where, let’s be honest, most adults and children just press the buttons for a few seconds then move on to something else. But, overall, rather entertaining and again it was free (included).

We found the cafeteria. Busy, noisy and with staff whose method of cleaning tables was to use a cloth to sweep everything onto the floor. Dougie wanted to make a quick exit but I knew we’d get tetchy without food so we persevered though we wished we’d found a Tesco as we seem to do most lunchtimes on this holiday.

Back outside, hoods up, we walked through the grounds and, despite the rain, we were still able to appreciate the Autumn colours, the pheasants, the lake, the waterfall. Best of all, we were virtually alone.

Eventually we conceded defeat and, pretty well soaked through and sniffling, we plodded back to the car. The log fire of the Old Swan and Minster Mill cheered us up, together with the fun we had listening to a dad trying to teach his two young children how to play snooker in the gallery above us:

“Come along now, Toby, that’s not the way to hold the cue….No…No…further down…ah well that wasn’t very good was it?….should have aimed the cue ball at the bottom of the red ball….ah Daddy won again”

Competitive Dad or what! (see sketch from The Fast Show, below)