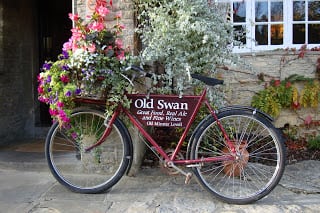 We were staying in Britain this half-term so there was no having to get up at a silly hour to catch a flight. Rather, a leisurely breakfast and into the car by 10am for the drive to Oxfordshire. Of course we still had the usual squabbles about which route to take. As Dougie doesn’t like the Corby-Kettering-Northampton route, we chose a new one via Bedford and Milton Keynes, though as our SatNav lady obviously prefers to travel via Northampton, she was having none of it. So it was me and the map.

Even though I say it myself, I was spot on with my navigation. There was only one hiccup when at a T-junction Dougie asked me if it was right or left. I said yes, it was right and said the name of the the village on the sign, “Aynho”. At which point he stopped the car and turned to me,
“So which way then?”
“I’ve just told you! Right”.
“But then you said, ay…no. So is it left then?”
“No, it’s right! I said ‘Aynho'”
“There you go again, AY…NO”
“NO….IT’S BLOODY AYNHO. THE VILLAGE. ON THE SIGN. LOOK”

We took a couple of detours: a lovely lunch…in Tesco car park off a roundabout in Milton Keynes (classy) and a quick stop at the neolithic stone circles, the Rollright Stones, which I thought would appeal to everyone. The King’s Men stone circle is set in a wooded clearing; across the road is a larger solitary King stone, while a short walk away is a group of leaning stones (the Whispering Knights). According to legend, a king left his troops while a group of knights were plotting treason. He encountered a witch who promised him, “Seven long strides shalt thou take And if Long Compton thou canst see, King of England thou shalt be.” The king thought this an easy task but hadn’t realised the hillside would obstruct his view, whereupon the witch turned him and his men to stone.

It began to rain as we were leaving, which all added to the spookiness of the experience. Back in the car and it wasn’t long before we reached our hotel, the quite beautiful Old Swan and Minster Mill near Witney. Our rooms were called ‘cosy’ which was quite apt as they were small, but perfectly formed! The rooms were together, reached by a lockable door to our own separate teeny corridor. Having dumped the bags (or rather, me dump the bags, Dougie carefully hang everything up) we set off for an explore and found a gorgeous lounge, complete with a crackling log fire. The boys decided to have a game of snooker in the minstrel’s gallery above. I told Rory what the gallery was for and he looked at me with a vacant expression.

“The minstrels played here’, I explained.
“Who are they, then? Some 70s group?”