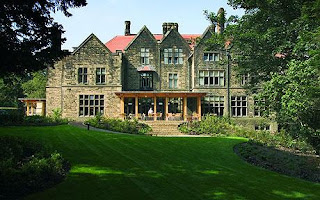 My cousin’s wedding last Sunday was a fabulous affair held at the highly-regarded Jesmond Dene House in Newcastle upon Tyne. I was quite tempted to call this blog post “My Big Fat Geordie Wedding” but the sophisticated surroundings and the sheer class of the wedding itself put paid to that title. My black sense of humour also had me toying with the idea of “One Wedding and a Funeral” as last week the whole extended family met up twice for two very different occasions. I think I’m on safer ground here, not offending anyone, keeping to my Mum’s Gone To theme!

The original Georgian Jesmond Dene House was designed by John Dobson (famous for designing many of Newcastle city centre’s historic streets). It was bought in 1871 by Captain Andrew Noble, a partner in Lord Armstrong’s Tyneside-based shipbuilding and armaments business. Knighted in 1902, Sir Andrew Noble moved in high society; Rudyard Kipling, Lord Baden-Powell, Chinese ministers and Japanese princes have all stayed or dined at the house.

It was later extended by a leading Arts and Crafts architect and after Sir Andrew’s widow died, in 1929, the house was variously used as a college, Civil Defence establishment (tunnels still exist under the house), seminary and, until recently, as a residential school. It took 18 months to convert the empty building, Grade II-Listed, to a hotel which opened in 2005.

And what a fine, warm, welcoming hotel it is. The wedding was taking place in the Great Hall at 2.30pm and, as we had decided to stay the night, we hoped to check in before the ceremony. Thankfully we dressed in our wedding gear at my mum’s before turning up, which was just as well as the previous guests hadn’t yet checked out. I was all for banging on the door and shifting the incumbents but was persuaded to have a G&T in the bar instead. We sat on comfy sofas, sipping our drinks and watching other guests saunter into the dining room for lunch. It may be a 3AA rosette restaurant but it didn’t appear to be at all stuffy: there were families and couples, mostly casually-dressed, some in jeans. One chap sat in the bar with a beautifully presented burger and chips with his laptop on the table (free internet connection in the whole hotel – hallelujah, that’s something larger hotel chains should seriously be considering).

The groom, best man, usher and assorted members of the bride’s family popped into the bar to join us, bringing unfinished bottles of fizz which we thoughtfully helped them to empty. It was at 2.15pm when we realised there was a wedding about to take place and we had no idea whereabouts. A quick word at reception and we were directed to another bar altogether where everyone else attending the wedding had already congregated. 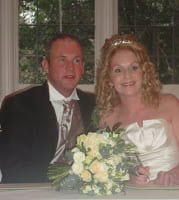 The ceremony was held in the wood-panelled Great Hall, accompanied by a harpist; quite beautiful. One of the readings was from the book The Velveteen Rabbit about how being old and shabby and worn out was a sign that you had been truly loved. I thought of my Dad and had to fight back the tears.

Once the bride and groom had signed the register we all filed out into the sumptuous bar and picked up a glass of spicy Winter Pimms en route. For the next hour photos were taken in the grounds and only once were the whole lot of us required to troop out for a chilly photo. Excellent.

In the meantime the Great Hall was miraculously turned into a dining room and speeches were heard before we ate. A good idea as the three men doing their bit could then relax and enjoy their meal. The Father of the Bride had been a frequent visitor to China on business so, following a tradition from their weddings, he gave everyone a small gift. It’s meant to be a gesture, a token really, so his choice was to hand each  guest a postage stamp. He gave us instructions to use the stamp to write a proper letter to someone we love. I intend to use my stamp to write to him and his wife as both of them have, as my Uncle and Aunt, been such a great support to my mum and dad over recent years.

My cousin’s speech, as Best Man, was delightfully rude and extremely funny. Thankfully only people with dirty minds would get most of the jokes, so I chuckled away  and then had to explain some of the quips to others on  the table. Let’s just say the rabbit he referred to in his speech was definitely not velveteen.

The meal – crab, chicken and sticky toffee pudding – was heavenly and it wasn’t long before the room had to be converted again for the evening do. Thankfully this was the ideal time for us to check into our room, kick off our shoes and have a little snooze. The bedrooms were gorgeous, very comfortable yet with all mod-cons and an appealing selection of toiletries which just had to be snaffled away into our washbags!

Unfortunately I snoozed a bit too long and the boys got carried away watching Top Gear on the TV, so we missed the ‘first dance’, appearing a tad dishevelled at the door just as everyone else was applauding. We joined in the clapping anyway.

We flagged a bit during the evening disco, despite bacon and sausage rolls appearing at 9pm to keep us all nicely topped up. In the end, the three of us crept away before the end and it was only as we climbed the stairs I noticed our part of the hotel had huge painings of naked women on the walls. I peered at them through my sore, contact-lens-stuck-to-eyeball state and thought briefly that these women could really do with a good trim.

Breakfast the next morning was top class: the full English made-to-order, plenty of newspapers to read and most of the wedding party arrived at the same time so we were able to chew the fat with them about the events of the day before.
The only complaint was an incredibly slow checking out procedure: the bride and groom, best man, chief bridesmaid and parents of the bride were all queuing along with us: one poor chap on reception was left to cope on his own while his colleagues could be seen in the office behind him. I’ll forgive them for this as everything else was just perfect, excellent value and anyway, I’ve a couple of bottles of Arran Aromatics Bergamot and Ginger shower gel, two bananas, a couple of tangerines plus a nice pair of slippers to compensate!