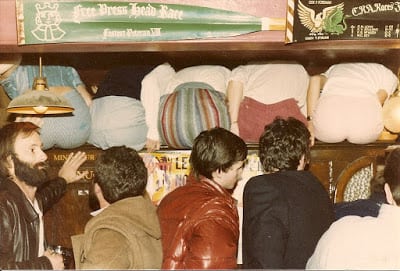 ﻿What an ingenious subject for this week’s Gallery – body parts. I took the opportunity to look through some old photographs for inspiration, rather than focus my lens on portions of my post-Christmas body which wouldn’t be a pretty sight.
The chosen photo was taken in the 1980s when I was at University in Cambridge. Like all students I was up for finding alternative activities to studying, so the chance to help in a record attempt seemed like an excellent use of a midweek evening. A gorgeous real-ale pub, The Free Press was near to our college, Emmanuel, and sported a very small separate drinking area, the snug, measuring about 6 ft x 5 ft. There was a record, set by another college, to cram as many students as possible into this small space….I know not why: it was a tradition.
When we arrived for the record attempt I decided this really wasn’t a great idea for someone who gets a tad wobbly in a lift, so there was no way I was going to cope in a tiny room with dozens of sweaty students. I opted for the less scary option of sitting on the wooden dividing wall with another four girls. As long as we had most of our body in the room then we were classed as being ‘in’ the snug. This wasn’t an official record, Norris McWhirter wasn’t hanging around with a clipboard taking notes, so I suspect the landlord made the rules up as we went along.
The chaps in the foreground,  local non-student regulars, were outside of the snug and seemed to have taken it upon themselves to ‘hold up’ the wall. I have no idea how they considered their non-beer-holding-hand was going to do any good if it collapsed but they weren’t giving up their excellent viewing position for anyone.
Somewhere in our house is a press cutting which will tell me how many people we managed to squash into the snug on that night. I sent Dougie up into the loft to look for it. He couldn’t find it but banged his elbow in the process and the language on the landing was choice. Best not ask him to look again. I do remember we broke the record and something like 58 people were counted. In hindsight if we’d only chosen little people and not allowed some of the rugby team to participate, we might have managed more. The current record I hear is 62.
So which bum is my bum? Recognise those buttocks? Have a cheeky guess!
For more photographs of body parts, visit Tara at The Gallery