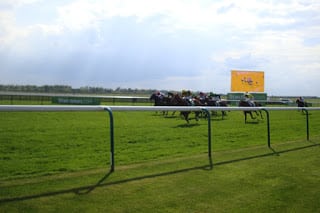 I’ve always enjoyed a day at the races ever since I was a little girl going to Redcar on the North East coast. My family would join lots of others on a coach which picked us up from the Lindisfarne Working Men’s Club in Wallsend where my Grandad was the Secretary. I still remember the first horse I wanted to back (or at least give my mum 10p as she held the kitty for a big group of us kids so that someone would win a pound on each race). The horse was called Lady of Elegance, chosen purely for the name, reminiscent of something from Arthurian legend. She may well have sounded elegant but she was, unfortunately, a three-legged donkey and failed to impress.

Over the years I have been to Ascot with some girly friends from John Lewis where we lost one of our group, last seen at the bar, hat abandoned, flirting outrageously: the Grand National, where, like many women, I chose Mr Snugfit to win as the name made me giggle, (he came second…), the Derby at Epsom which I can’t seem to recollect at all so I’m assuming it was a good day and lots of trips to Newcastle, Newmarket and, more recently, Doncaster.

One of the most bizarre was a day at Huntingdon races where our son particularly enjoyed the special race of the day involving all the mascots from the football league. I seem to remember Cyril the Swan from Swansea had a fracas before the race, injuring the wrist of a woman dressed as a dog as he jostled for position. If you think I’m making it up, you can read the news report about it HERE .

The best part about going to the races is people-watching. There are the toffs who are dressed to the nines; the girls out to party with tango spray tans and backsides squeezed into neon-coloured satin frocks; the serious spivs in shiny suits and the country types in brogues and checked shirts. Children are always welcome: free entry to under 18s, bouncy castles and rides for the little ones, lots of excitement watching the horses thundering past.

On Saturday we decided to go to the Guineas Festival at Newmarket. Although we aren’t serious gamblers (£2 each way is about our limit), we try our best to make some sense of the form. More often than not however, our decisions regarding which horse to back are still based on favourite names, colours and, occasionally, picking the horse which has done a mighty big dump in the paddock beforehand so we reckon he’s got a bit of extra pace in him!

This Saturday Dougie stated that he would really make an effort to bet sensibly. He toddled off to the corner shop, asked for a copy of The Racing Post then had to pretend he knew what he was talking about when the newsagent engaged him in some horsey conversation regarding a local trainer and recent form. He then spent the next couple of hours reading and scribbling notes before stating confidently that he had the winners this time.

We had a great day out: the weather was gorgeous and the people-watching was hugely entertaining as there were some cracking outfits with matching fascinators and groups of people dressed as leprechauns and jockeys. By the end of the day, however, things looked a little tawdry. Empty jugs of Pimms stood forlornly next to abandoned stilettos and betting slips; fake tan started to streak down hot shins and hats were hanging precariously off tired hair-dos. Rory and his pal wandered around picking up discarded betting slips hoping to find a winner until I stopped them as, for goodness sake, heaven knows what muck you’re picking up.

As for my very own John McCririck, all his tips were completely useless. None of his horses came anywhere near the top six. Rory, however, with the bets we put on for him and his wee mate, managed a second place with Dick Turpin, winning him the princely sum of £13.20. Nearly as good as his pick at Doncaster last summer when he won £50 on Spruce Caboose which he had chosen for some obscure link to Mr Burns in The Simpsons. His dad should take some lessons here.