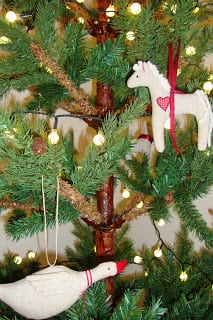 John Lewis has become synonymous with Christmas over recent years thanks to their memorable TV adverts which, if you’re an emotional fool like I am, can’t fail to produce a lump in the throat. However my association with the department store goes back many years. Straight out of University I joined the company on their Graduate Training Programme. I began my training in the Oxford Street branch in September 1985 (see, I told you, eons ago) and, after a couple of years, moved to John Lewis, Peterborough to manage the Stationery Department.

Part of my responsibility was the Christmas department which we had to open by the middle of September each year. I remember having to deal with the delivery of hundreds of boxes of crackers, trees and baubles galore. Days were spent decorating trees for the displays – they had to be themed and I liked them to be symmetrical and balanced. We also had to deal with numerous cantankerous customers who thought they were the only ones to complain that we were displaying Christmas goods so early. I do remember one customer who managed to pull off a complaint with panache. Glamorous and well-dressed, she walked confidently down the aisle until she came across me, on my knees, up to my eyes in tinsel. She removed the sunglasses from the top of her head, surveyed the scene before her and announced:

“Oh dear God, Christmas! And I’ve still got a tan!”

Just for the record, I continued working for the company for 11 years in total, my final position being Staff Trainer at Peterborough before leaving to have my son in 1996. I have very happy memories of a fun, supportive work environment and, of course, Peterborough is still my local John Lewis so I am always shopping there and I see lots of former colleagues while I’m visiting.

So, this is a roundabout way of saying you can imagine the wry smile that spread across my face when I was asked if I would like to review a selection of Christmas decorations from John Lewis. Absolutely yes! Little did they know they were asking an old hand. 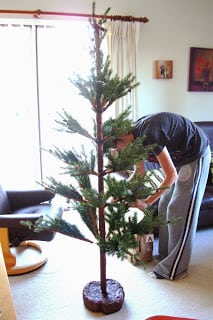 I was sent a 6′ Woodland Christmas tree, some white popsicle lights and a selection of decorations from the ‘cambric and cream’ collection. They arrived yesterday and a surprisingly excited 17 year old son immediately took charge of the whole decorating process, unaware his mother was hyperventilating, concerned that he ‘might not do it right’. I needn’t have worried. He has obviously absorbed this talent by some process of osmosis coupled with his father’s borderline OCD.

The tree is a doddle to erect. A base, three interlocking parts of trunk and the branches flop down from their hinges. It has a contemporary look, quite minimalistic yet rustic at the same time. Its neatness and the fact that it isn’t overly wide, makes it ideal for smaller rooms.

The lights, which can be used indoor or outdoor, are very appealing round balls of pale white, like a small gobstopper, very different from the usual pin-lights I have used before. They have LED bulbs so use 75% less energy than normal ones.

The decorations are, quite simply, adorable and, I have to say, brought a tear to my eye (I did tell you I was a soppy old thing). The reason being, a few years ago our treasured box of tree decorations was irreversibly damaged when a family of mice decided to nest in it while it was being stored in the garage. Baubles and ornaments I had bought during my time at John Lewis, were soiled, along with decorations Rory had made for me when he was little: a toilet-roll/cotton wool snowman, paper lanterns, pom-pom baubles. We had to burn the lot. We did replace some of them but mainly with plain red and gold baubles to fill the space on the tree. However the fabric decorations I was sent yesterday are just perfect: teddies, dogs, cats, robins and hearts, plus a delightful Christmas banner. I can see them becoming family Christmas heirlooms in the future.

The strapline for John Lewis’ ‘The Hare and The Bear’ advert is ‘Give someone a Christmas they’ll never forget’.

I think someone just has.