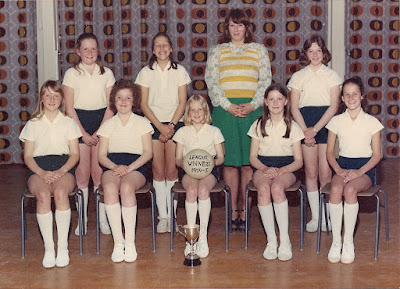 One of my very few sporting successes occurred in 1974 when I was 10. Our netball team from Chapel House Middle School, Newcastle, won the Golden Wonder Winter Tournament in our first season in competitive netball. I played centre position and in the photo I’m far right in the front row.

If you had any doubts that this photo was taken bang slap in the middle of the 1970s, there are a few clues(click on the photo if it’s too small to see):

Looking at the names on the back of the photo we have Sandra, Karen, June, Fiona, Nicola, Louise, Ursula and me, Patricia. I also know that Susan was missing from the picture as she appears in the newspaper cutting I have from that time. The selection of names alone would pinpoint the year fairly accurately.

The theme for this week’s Gallery is Education. I think there will be some great nostalgic photos so a visit to Sticky Fingers is a must today.