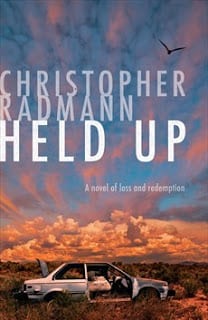 As Paul van Niekirk drives his new car away from the BMW dealership in Johannesburg, he has no idea his successful, pretty much perfect world is about to be shattered. Held up at gunpoint and dragged out of the car before his abductor drives off, it is only then he remembers in a flash that his nine-month old daughter was in the back of the car and has now disappeared.

A gut-wrenching premise for a story which I had expected to be followed by an action/ thriller type narrative, all guns blazing, car chases and at lightning pace. How wrong could I be. This book is quite a revelation as the battle which ensues is more about the mental torment Paul suffers and the effect such a traumatic event has on his marriage.  We follow him into the murky world of people trafficking and we see how he discovers his own propensity to violence. All this set against the changing face of South Africa.

A slow burner, there were times at the beginning I wanted to shout at the couple to stop making bacon and eggs and do something constructive to find their baby. But then I have no idea how I would cope in such a situation: what aspects of life would continue as normal, how proactive would I be searching for my child, would I just dissolve as despair enveloped me? As the pace quickens we see how husband and wife deal with their grief and, in particular, we witness the lengths a man will go to in the search for his missing daughter. It isn’t pretty: it is raw, bleak and violent. But there is always hope and with that hope, the possibility of redemption.

This is a debut novel by Christopher Radmann who writes with an authentic, strong voice and an exceptional command of the English language. It’s not surprising to learn he was born in South Africa, studied English and taught at a range of South African schools. After too many near misses in a country where violent crime touches everyone, he moved to the UK with his family twelve years ago and is currently Head of English at an independent boys’ school in Hampshire. I do hope those young boys appreciate what a skilled writer they have in their midst because here is a man who has a real gift and a passion for writing which shines through this powerful novel.

Headline Review sent me ‘Held Up’ to review. It is published as a trade paberback priced £12.99 and an eBook priced £13.