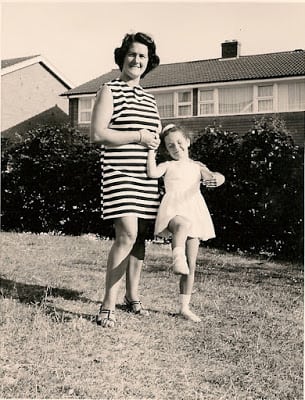 Look at me, posing in the garden like a true pro, mouth clamped shut to avoid exposing missing teeth. Beside me, my fabulous mum, Eileen.

Mum had always wanted to have ballet lessons but with five other girls in her family, her parents couldn’t afford lessons so her dream never became a reality. Maybe this was for the best as she found her talent lay in singing instead and had a successful career as a mezzo soprano.

She was delighted when I asked to learn ballet and eagerly booked me into a local school. However I didn’t prove to be much good and she recalls how, in my first exam, I had no idea what the steps were so was forever stopping to tilt my head so I could watch the examiner’s feet which were subconsciously going through the moves as she sat  behind a table. I gave up soon after.

Mum supported me in my next choice which was to learn Highland Dancing. I was good at this. So good that I became the North of England Beginner’s champion in 1974. Get me. I was faultless at the Fling and stupendous at the Sword Dance. I remember countless weekends my family would take me to competitions around the North East. It must have been utter purgatory for them having to listen to hours and hours of the same bagpipe tunes wailing in a school hall, watching a succession of little girls thudding the same steps on a rickety stage.

I put down my swords when I was 13: my kilt became too short and as it was an expensive piece of kit, requiring a fitting up in Edinburgh, I decided to call it a day. I drifted into singing and acting at school instead and have continued the am-dram stuff over the years.

Mum has been very proud of all my achievements: like most mums, she has experienced as much joy watching me perform as if she were on the stage herself. What she probably doesn’t know is that the love and pride she has always had watching me is matched by my love and pride in her. When I look back at old videos of her singing – a fabulous rendition of Carmen’s Habanera on the opening night of Tyne Tees Television, complete with dancers swishing around her – I see a beautiful, talented woman and I think, wow, that’s my mum.

The theme for this week’s Gallery is ‘Mother Love’. See Tara’s page for more entries.