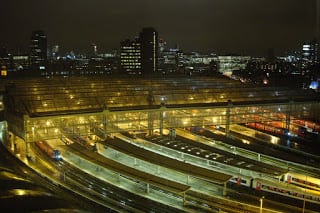 ‘City view’ it said, when I booked the hotel. Indeed. We could just about see some of the landmark London buildings but only when the eye travelled past the glaringly obvious sight of Waterloo Station. If our son had been six again and fond of choo-choos then this would be kiddie heaven. Pretty cool at night though.

Amazingly the double-glazing was so thick that we couldn’t hear a thing from our room on the 12th floor. The positives of the Park Plaza County Hall hotel definitely outweighed the negatives. Very much a family friendly hotel, most rooms, like ours, had a lounge area with sofa bed and a kitchenette with microwave and coffee machine. Not sure why there were scales in the bathroom. The last thing you want to be doing on holiday is getting hung up about the effect of those extra croissants you managed to secrete into a napkin at breakfast.

Our son, Rory, has a typical boyish fascination for all things gruesome, so was very keen to see Ripley’s Believe it or Not Museum. I wasn’t so keen after I’d seen the cost of admission. I managed to find some online deals: a 20% discount voucher from Discount Britain or 10% off if you buy the tickets online from Ripleys itself. I decided, oddly enough, to go for the 10% option to save queuing in the freezing cold. Bad decision. I waved my online ticket at the woman on the door, expecting to be ushered through, only to be told I still had to queue with everyone else. I seethed for the rest of the day at my wasted 10%.
Rory loved the museum and I admit there were some great exhibits – the Swarovski crystal covered Mini, the shrunken heads and an interesting collection of tribal cod-pieces. There was also a photo opportunity with a chastity belt which I declined. As Rory had the camera that day I felt I could hardly ask him to do the honours while his mother straddled a huge pair of metal knickers. 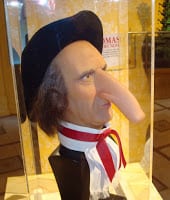 Some of the exhibits, though entertaining, were copies of originals or dummies of people from history with goggly eyes or large appendages like the chap opposite. An upmarket P. T. Barnum’s really. Didn’t he invent the phrase “There’s a sucker born every minute”?
After a relentless search of Regent Street and Oxford Street to look for clothes for a gangly teenage boy (there’s a gap in the market, somebody fill it please!!)  we started back to the hotel but not before spotting Margaret from The Apprentice waiting for a bus.

An hour or two back at the hotel was bliss just watching the Winter Olympics and scoffing complimentary shortbread biscuits (they’re free so I’m eating them).

We found a lovely local Italian for dinner then retired to the bar for a nightcap. Rory wandered back to the room leaving Mum and Dad to order ridiculous cocktails. The speciality was Martini variations. Husband Dougie picked a Vesper which sounded cool and 007-ish but turned out to be like neat meths. Mine, Coco Crumble, was very girly with vanilla vodka, amaretto, cinnamon syrup and apple juice. Dougie thought this sounded vile but he had to admit that it beat his into a cocked hat on the taste front.
Half an hour later we are cloaked in an alcohol-induced warm fuzziness and feeling nicely smoochy.

My mobile beeps. A text from the boy: