“I agree, it’s a fabulous room but I think it’s going to be noisy.”
“Why do you say that?”
“Well, we’re on the first floor, right above the bar and they have live music there at weekends.”

Trust his Lordship to put the dampers on things.

It was August and we had just arrived at the Park Plaza, Westminster Bridge, following our night on the yacht. You must remember my night on the yacht, heaven knows I bragged about it enough. We decided on a further night in London so we could go to the theatre and see One Man, Two Guvnors. I was reminded of this when reading fellow blogger, Curry Queen‘s post about her visit to see the show in Broadway, with James Corden in the starring role. It dawned on me that I had never actually written about either our hotel or the play. Must have been that mirrored ceiling above our bed on the boat – affected my memory.

Before I carry on with the hotel review, I do have to say that the play was outstanding. Like Curry Queen, I don’t want to give too much away but it was one of the best things we’ve seen at the theatre. Farce but with a whole lot more to boot. Owain Arthur played the lead in the production we saw and was excellent. If you get the chance to see it – go, go go!

Back to the hotel…

Captain Sensible needn’t have worried. The hotel was so well sound-proofed you couldn’t hear the music or the traffic outside and I don’t think I heard any stomping down the corridor either. A new addition to the Park Plaza group of hotels and right next door to the Park Plaza County Hall where we stayed a few years ago, the location is pretty good: on the river, next to the London Eye. It’s an imposing building and when you enter through the revolving doors into the huge lobby there is a striking bank of escalators feeding guests up to the reception desk: it feels like a cross between an airport terminal, a shopping mall and a spaceship.. The vast amount of space throughout the hotel makes it unlike many hotels in the capital and there was a buzz about the place which appealed to me.

We chose to stay in a studio room which was very large by London standards. With a convenient 3/4 length wall separating the bedroom from the living area (where Rory was sleeping) and large LCD TVs in both areas, we certainly weren’t on top of each other. Complimentary wi-fi throughout the hotel kept our teen happy and the tea and coffee-making ‘station’, complete with a microwave, fridge and a separate sink, was a big hit with me. I have to say, whoever decided on the sink was a genius: how many of us have wanted to fill the kettle on holiday only to find someone is ensconced in the bathroom and may be some time?

The hotel has a number of eating establishments ranging from a light and airy coffee bar to a patisserie/lounge area, a sushi bar and Brasserie Joel. We chose to have a pre-theatre dinner in the Brasserie and it was delicious and pretty good value for such a gorgeous restaurant and attentive service. Can I remember what we had? I think Dougie had some kind of marinated tuna followed by steak and Rory and I both had butternut squash soup followed by sea bass? Whatever we ate, it was wonderful and I would recommend the restaurant even if you’re not staying in the hotel.

The brasserie is also used as the breakfast room and is way too small for families at busy weekends. When the world and his wife traipsed down at 9am Sunday morning, the hotel had set up a separate breakfast area in the hangar-sized ballroom in the basement of the hotel. Yes it did the job but with trestle tables groaning with tea urns and food warmers, it had all the appeal of a soup kitchen.

The hotel can be expensive, particularly when their website has the annoying habit of not including VAT on the rooms until the final part of the booking process, but if you can get a good deal then it’s worth considering. There is a spa and a swimming pool, although we didn’t use them on this quick, one-night stay. Worth noting that, for families with young children, there is a babysitting service and children’s menu.

If  you do go, sit down in these quirky chairs and admire the view. 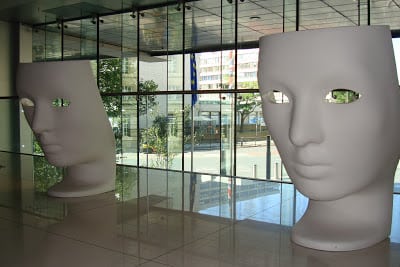 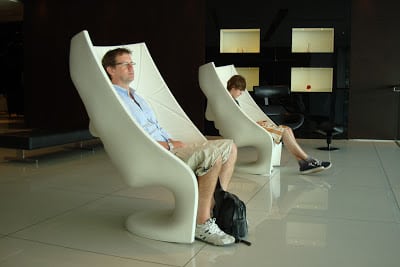