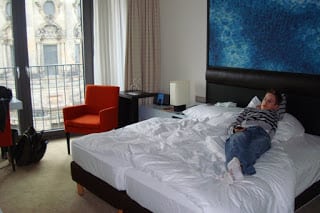 The teenager’s preferred activity when on holiday….
In order to encourage our son, Rory, to get his body out from under the duvet, we try and lure him with the delights of the hotel breakfast buffet. However, after three days of urging him to do the decent thing and fill his plate with every item available (like his Dad does), it dawns on me that his hunger is of secondary importance to his wish to be immobile. So I have to revert to Mummy-mode and while he sits hunched over the table, squeezing packets of sugar and flicking the cutlery, I queue up at the omelette station for him. It pains me to say that bringing the food to the little prince certainly works….though the words “rod” and “back” spring to mind.
Sightseeing without putting one foot in front of the other can be a little difficult but our hotel is on the river and there are numerous river cruises available. We reckon teenage son can manage the hotel elevator and tumble gently into a boat for our last day in Berlin. Of course with husband choosing which cruise to go on I should have realised a scotsman would pick the cheapest, so we have a 7 euro guided tour up the River Spree, in German. No headphones to translate, just us three dimwits and a very jolly group of German tourists. At times I gather the commentary is rather amusing. 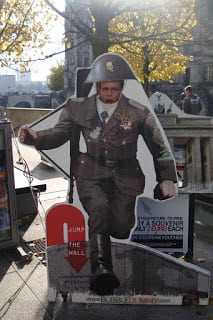 Unfortunately Berlin is not awash with moving pavements so for the remainder of the day our son has to learn to walk again. We have a fruitless trek to find a street which is supposedly full of post-war Russian architecture (we couldn’t find it so had an argument) but our mood lifts when we see a put-your-face-through-the-hole cardboard cut-out of a German soldier. Hubby, as you can see, can’t resist this; it’s just so “kiss me quick”.
In the evening we decide not to do our usual which has been to have dinner at the hotel – such a lazy choice, I know, but the restaurant Heat, with its “asian-fusion” cuisine (curries and noodles to you and me) is pretty damn good and with a post-prandial cocktail in the bar while son disappears to text his pals from his room, there are definite advantages. But tonight husband has other ideas and we try to find a recommended steakhouse. Well he has us trudging round the seedier parts of Berlin, next to the railway station, past some very unsavoury aromas, until we have a bloody fine bust-up on Friedrichstrasse. Son decides to side with me: as is his usual way, he drifts towards the winning corner and says:
“Yeah Dad, where is this place then?”
“Don’t you interfere”, says Dad, “this is between your mother and me”
As the argument is now three-way it now looks like we might be heading back to the hotel for a tandoori chicken but luckily for us, en route we discover a gorgeous traditional German restaurant, underneath the beautiful Opernpalais. The Schinkel-Klause has the biggest juiciest steaks, the atmosphere is warm, the waiters make a fuss of our son and he, in turn, becomes conversational and tells us lots of funny stories from school. All is forgiven.
“Now, my lovely boy”, I smile, “what can I get you for breakfast tomorrow?”
October 2009