The theme for “The Gallery” this week is a photograph which represents a treasured book. My chosen novel is A Room with a View by E.M. Forster. The novel tells of Miss Lucy Honeychurch and her chaperone visiting Italy in the early 20th Century with all the repressed sexuality you can squeeze into a tightly-pulled corset. The book became a favourite of mine at around the same time the Merchant Ivory film of the book was released in 1985. I’m convinced a huge part of my love of the film was the soundtrack, particularly the excerpts from Puccini operas. Heavenly.

The view referred to is that of Florence and the River Arno.  My photo of  Florence was taken in 1995 when Dougie and I had a wonderful holiday in Tuscany and Umbria. We had married in 1990 but there still wasn’t a baby on the way. This trip was a time to relax, explore and enjoy being together away from the pressures of work. We stayed in a gorgeous little hotel near the village of Artimino, hired a car and went sightseeing every day: Siena, Assisi, Orvieto, Pisa, Lucca and, of course, Firenze. I remember it was quite a climb to reach Piazzale Michelangelo on the other side of the river in order to snap a decent view of the city; Dougie tells me I moaned all the way up the winding path. 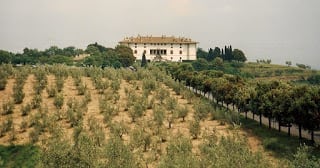 We returned from Florence in our little car and sat in the grounds of the hotel, looking out at the Medici villa next to our hotel, in the heart of the Tuscan countryside. I had brought the book with me to re-read and had reached the point where Lucy and George had their famous kiss in the fields around Fiesole. I felt very romantic and emotional.
The holiday continued and was quite perfect.
I came home refreshed and…….pregnant.
If my boy had been a girl there was a strong chance we may have called her Florence.