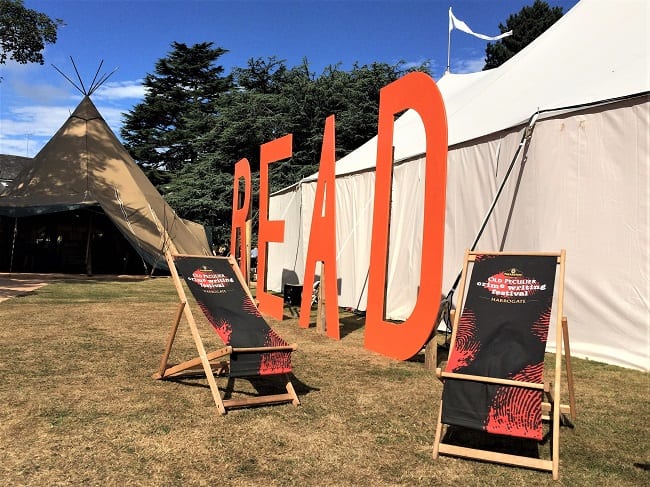 When you’re at a Quiz Night and the Pointless presenter, Richard Osman, is in the neighbouring team, you know your chances of winning have just gone out the window.

This was a surreal moment at the Theakston Old Peculier Crime Writing Festival 2018. A similar moment occurred when the Fun Loving Crime Writers took to the stage. Some of the big names in the crime-writing world, including Val McDermid and Mark Billingham, have formed a rock band and were enthusiastically murdering songs such as ‘I Predict a Riot’ and ‘Watching the Detectives’. 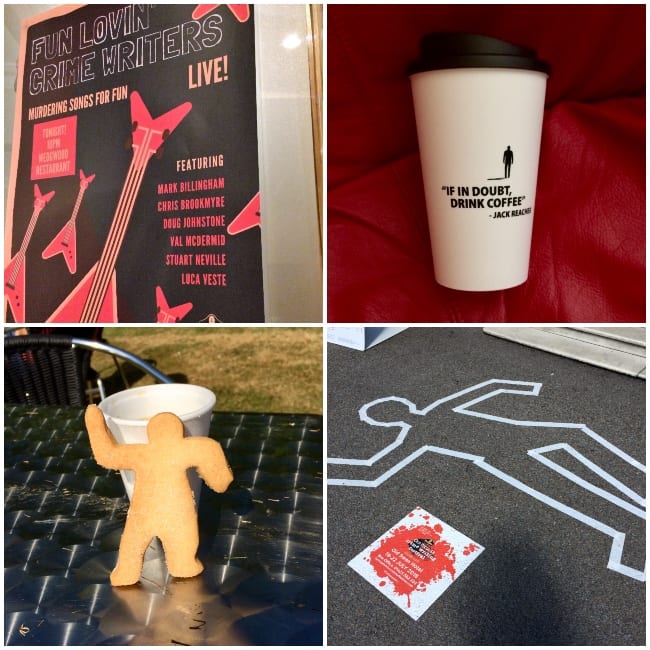 Every year crime fiction fans flock to the genteel Yorkshire town of Harrogate to meet their favourite authors and listen to talks about the crime genre. The event is held over four days at the Old Swan Hotel, an ideal location as it was here, in 1926, that Agatha Christie was found to be hiding, after her disappearance. 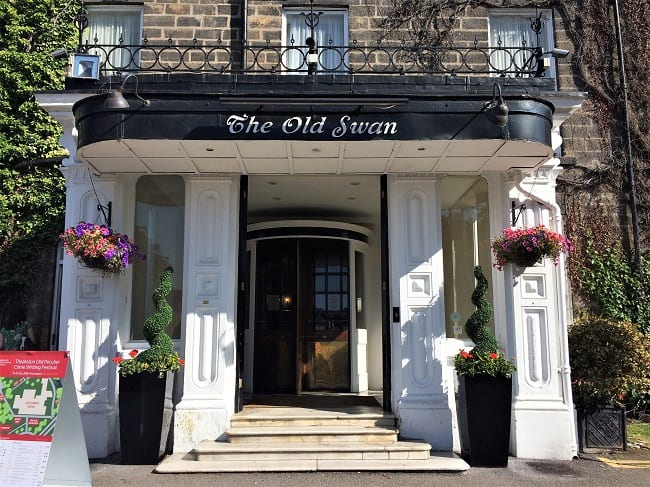 Of the two of us, Dougie is more of a crime fiction aficionado so when friends asked if we would like to accompany them to the festival, he was particularly keen. I’m so glad we said yes as the weekend was a blast from start to finish. We attended talks in the ballroom of the hotel, found the bar and a bookshop in the grounds and popped along to lots of extra events to publicise new books. We even managed a visit to the iconic Bettys tearooms before immersing ourselves in all things criminal. I was the only one in our group to order the traditional afternoon tea and it was scrumptious. Who knew Bettys did fish and chips too! 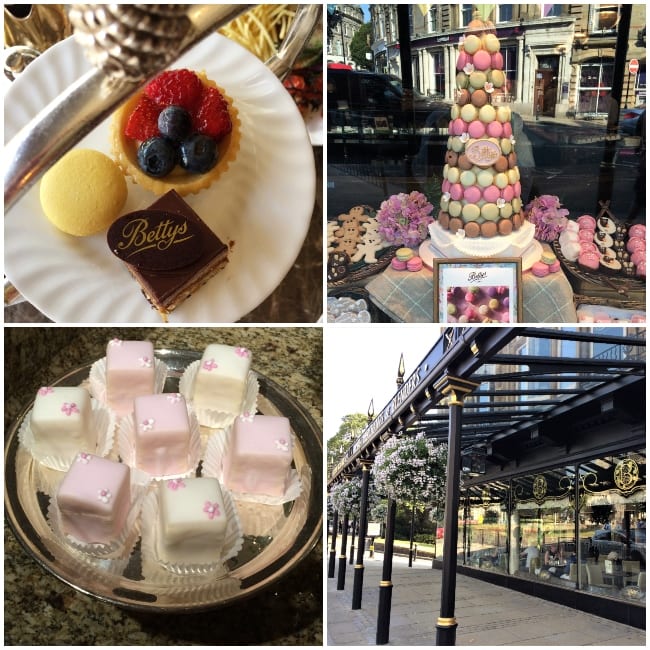 As newbies to the Theakston event, we were surprised at the accessibility of the authors. This year’s chair was Lee Child, one of Dougie’s favourites. He was a permanent fixture in the grounds of the Old Swan Hotel, coffee in hand and canvas bag over one shoulder, readily accepting new books to read from other novelists.

I said hello to Clare Mackintosh, author of bestselling thrillers such as I Let You Go and I See You. I used to know Clare when she was a blogger and nobody knew of her previous employment in the police force. Clare remembered me, we hugged and reminisced about the old days of mummy blogging.

Dougie spoke to an author he has admired for many years; Scottish writer, Chris Brookmyre. I think it was the unusual titles that first drew Dougie to him: A Big Boy Did It and Ran Away just yearns to be read. Brookmyre, as well as being an integral part of the Fun Lovin’ Crime Writers band, has also co-written a historical crime novel with his wife, consultant anaesthetist Dr Marisa Haetzman, using the pseudonym Ambrose Parry. We didn’t manage to snaffle a proof copy of The Way of All Flesh but we have some sample chapters to try and I think we’ll be ordering the full book very soon.

Dougie also introduced himself to Elly Griffiths as they have mutual friends. Cue more hugs. I was also keen to meet Elly as I’ve started to read her Ruth Galloway series of books set on the Norfolk coast. As that’s our bit of coastline we head to when we need a dose of the seaside, the novels resonate with me.

Her new stand-alone novel, The Stranger Diaries, is due to be published in November, so I picked up a proof copy at the festival. Set in West Sussex, this contemporary Gothic tale has a welcoming touch of humour. I’ve just finished it and it didn’t disappoint. Not too scary, lots of twists and a great cast of authentic characters. 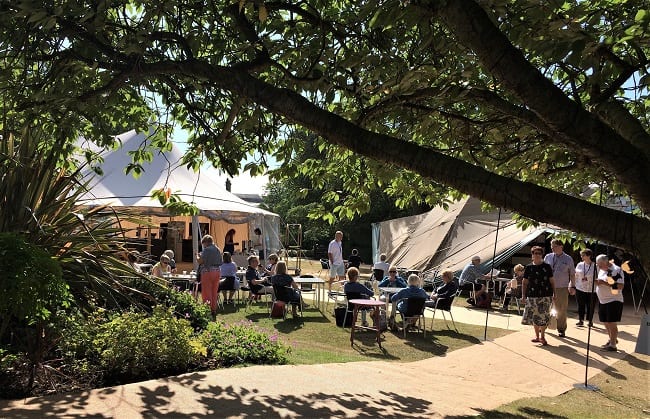 One of the most interesting sessions at the Theakston Old Peculier Crime Writing Festival involved writer Val McDermid talking to Dame Professor Sue Black, an eminent forensic anthropologist. Professor Black has written a book, All that Remains, about our attitudes to death. From the engaging way she spoke of her work, both in the lab and in the field, investigating mass fatalities, I’m sure this insight into the subject will be sensitively handled with expertise and humour. During the talk, Dougie realised he had been studying anatomy at Aberdeen University in the 80s at the same time as Professor Black. He caught up with her after the session as he purchased her book. She was delighted to know about the connection, recalling former professors they had both worked under.

Another intriguing guest was BBC Radio 2 presenter, Simon Mayo, who has just written his first adult novel, Mad Blood Stirring (for other Drivetime listeners, good to know he couldn’t resist a title that would work for Three Word Thursday). Inspired by true events, it tells of a group of American sailors incarcerated in Dartmoor Prison in 1815. Simon has unearthed a most extraordinary fact about this period of history. I won’t spill the beans but let’s just say, for an Am Dram luvvie like me, this surprising event adds a whole new level of interest to this chilling story.

The panel sessions that were held each day enabled readers to hear more about the mechanics of book-writing: the habits and routines of the auhtors. After a special event at The Royal Hall in Harrogate I now know that Lee Child likes to write in the evenings whereas John Grisham is a morning person. In other sessions at the hotel I learned that coffee shops are still favourite haunts; ideal places for picking up dialogue. The lovely Ann Cleeves, creator of Vera and Shetland, still likes to travel by bus and has trained her grandchildren to eavesdrop on conversations in cafes.

Writing about places you know was a common theme throughout the weekend. Once I’d heard Yrsa Sigurdardóttir speak about her native Iceland, I was captivated by her. It might have been her intellect (she’s a civil engineer) or her unusual approach to writing (she needs a large TV screen in the background playing horror movies on a loop). Or was it the cute bunnies attached to her shoes? Whatever the reason, I’ve just bought one of her books. Yrsa told us she has to invent Icelandic crime because there’s so little of it in the country and, in truth, her countrymen are not very good at it. She mentioned an Icelandic blackmailer who was caught because he provided a receipt and a hostage situation involving just a kitten.

Also in this session, chaired magnificently by the fantastic BBC Breakfast presenter, Steph McGovern, was another Nordic Noir novelist, Norwegian Samuel Bjork. He loves to explore his home country beyond Oslo, finding interesting places ‘where people can die’. We’ve now bought his two crime novels, hoping to discover these spots for ourselves. 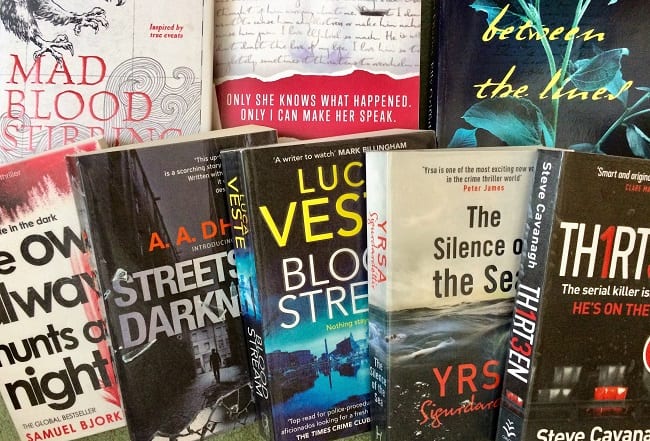 We came away from the festival with plenty of loot: a whole stack of books, some bought, some given and some unpublished proof copies, to keep us going well into the winter months. In the last two weeks I’ve been gripped by crime fiction, stealing every spare moment to sneak into the spine-tingling world of murder and intrigue. The TV has been usurped by the written word, as Dougie and I are cooling off in the garden in the evening, rapidly turning pages and sharing the gruesome bits from our new books.

One novel we both agree is a corker is Thirteen by Steve Cavanagh. The chase is on to catch a serial killer but in this twisting tale, he’s on the jury. If you like your baddies really evil, you’ll love this.

A proof copy I’ve just devoured is The Silent Patient by Alex Michaelides, due to be published in February 2019. How to describe it? Gone Girl meets One Flew Over the Cuckoo’s Nest. A psychological thriller that I can see being a great movie, even more so when I read that the author is a successful screenwriter of The Devil You Know (2013)and The Brits are Coming (2018).

Dougie recommends the thrillers by Luca Veste, an entertaining Liverpudlian writer, and AA Dhand, from Bradford, who spoke so engagingly about his detective, Harry Virdee.

Did we win the quiz? My Pointless friend trounced us all: no surprise there. Thankfully our detective skills are rather better than our crime knowledge. During the Author Murder Mystery Dinner, where we sat with novelist Caroline Mitchell, we guessed the killer correctly. I even spotted the clue about the killer being an ex tennis pro, so was likely to have a strong right arm. I was ridiculously pleased about this, as you can imagine. Caroline, our team captain, had hardback copies of her stand alone thriller, Silent Victim, for everyone at the table. 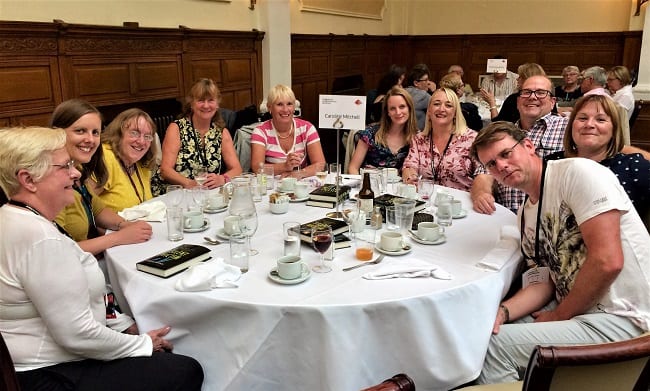 All in all this was a murderously good weekend. Count me in for next year.

The Theakston Old Peculier Crime Writing Festival is held every year in Harrogate in association with Harrogate International Festivals. We paid for a weekend package from 19th to 21 July 2018 which gave us access to all the talks, accommodation, breakfast and lunch. We paid extra for the author dinner and the Dead Good Readers Awards. If you’re interested in next year’s event, click HERE for details. 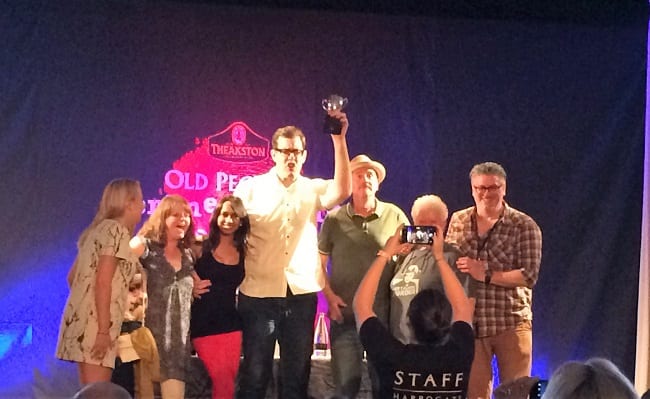