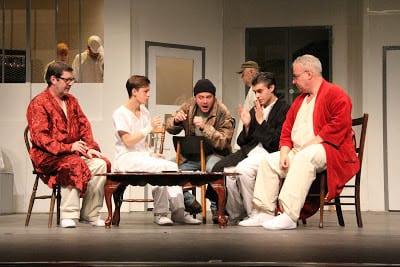 I’d heard of the film and yet, I’m ashamed to admit, I’ve never watched it. I knew it starred Jack Nicholson but I had no clear knowledge of the plot, the characters or the denouement. So it was with a completely open mind I went along to see Spalding Amateur Dramatic and Operatic Society’s production of Dale Wasserman’s play, One Flew Over The Cuckoo’s Nest, based on the book by Ken Kasey.

SADOS were determined to engage the audience as soon as they entered the theatre. In the foyer members of the cast were acting out their roles as patients in a mental institution, watched by their aides and nurses. I approached one of the aides, a friend of mine, and asked him in a whisper whether I was allowed to talk to him. I was told in no uncertain terms to ‘Move along, ma’am’. Buying a programme, when a disturbed inmate is repeatedly banging his head on the wall next to you, is quite a surreal transaction. Seated, patients were walking in the aisles, constantly dusting the handrail or muttering to themselves. It was quite uncomfortable. My husband, who spent six months in psychiatric wards as part of his medical training, commented that their portrayal of mental illness was uncannily accurate.

It can sometimes be hard to watch a play where you know many members of the cast: you have to work a little harder to dismiss the person you know and focus on the character they are playing. Not in this production. I was completely transfixed from the very beginning. It wasn’t Martin, Kevin or Clive up there on the stage but Charles, Scanlon and Dale. And they were good: very good. That tingling feeling you get when within five minutes you are transported to a different world because of the talent shown by the actors. It’s what makes live theatre such a joy.

Of course, the success of the play was inevitably going to depend on whether the the actor playing the central role of Randle McMurphy was up to the job, particularly when the part is synonymous with Jack Nicholson who won an Oscar for his performance in 1975. As soon as Nick Hallissey swaggered onto the stage in his leather jacket and beanie hat, I knew he was pretty damned perfect for the role. He commanded the stage with his big voice and infectious laugh, easily becoming the lynchpin of the cast and yet  never overwhelming it.

The director, Brett Moore is to be applauded for a) tackling this play in the first place when the group is more comfortable with comedy and b) matching the actors up so well with their respective parts. Who would have thought that mild-mannered Kevin Palmer could be transformed into the angry, shaven-headed psychopath Scanlon or that Zack Colam would be perfect as the hallucinating Italian, Martini? And did he persuade our current set constructor, Mark Hancocks, to nail himself to the scenery to play the very disturbed Ruckly who probably had the best lines of the play, exploding every so often with the words, “F**k ’em all!”?

I was impressed with Martin Tyrrell who played the excitable but frightened, child-like character of Charles Cheswisk and I thought Charles Long was achingly good as the stuttering, scared Billy Bibbit. Keeping the storyline going was the big voice and persona of Nick Fletcher as Chief Bromden; another excellent performance. All of the cast members who played mentally-ill patients had obviously done their research. Even when lines weren’t being spoken the actors were always in character: the foot shuffle, the idle clapping, the involuntary hand-shaking.

Well done to the rest of the cast who were just as important in making this play such a success including Jane Moss as the cruel, controlling Nurse Ratched, Ollie Johnson as bullying Aide Warren and Daisy Ivatt as the beautiful and sexy Candy Starr.

The play also scored highly on an effective set design and clever use of lighting which captured the mood whether it was to spotlight Chief Bromden’s narrative or to emphasise the clinical starkness of the ward. Appropriate costumes and props are vital to keep the audience believing the story which is being told. Well done to producer, Elaine Deathridge and her team for making sure these were authentic.

During the final scene, when the cuckoo eventually flies, I was choked with tears. That’s usually a pretty good test of whether a production has moved me. I had an open mind when I arrived at the theatre but a stimulated, enlightened one when I left.

Huge congratulations to everyone involved in bringing this play to the stage in Spalding.