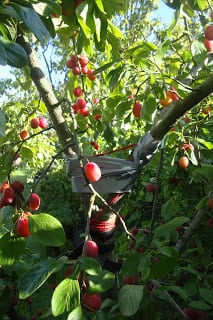 Many of you will know about my other half’s love of the silver grey sticky stuff. You may remember from a previous post of his expertise in fixing lethal barbecues, wobbly frying pans and burst rubber rings during our holiday to the Dordogne. The photo (left) also shows how he tried to rescue our over-burdened plum tree with a good strapping of gaffer tape.

But is it duck or duct tape? Let me allow the good people who make ‘Duck Tape’ explain its history (info taken from this website here)

“The first name for Duct Tape was DUCK. During World War II the U.S. Military needed a waterproof tape to keep the moisture out of ammunition cases. So, they enlisted the Johnson and Johnson Permacel Division to manufacture the tape. Because it was waterproof, everyone referred to it as “duck” tape (like water off a duck’s back). Military personnel discovered that the tape was good for lots more than keeping out water. They used it for Jeep repair, fixing stuff on their guns, strapping equipment to their clothing… the list is endless.

After the War, the housing industry was booming and someone discovered that the tape was great for joining the heating and air conditioning duct work. So, the color was changed from army green to the silvery color we are familiar with today and people started to refer to it as “duct tape.” Therefore, either name is appropriate”


So now you know.

My husband, a mild-mannered country doctor, loves his duck tape and at home it is used to tape up a broken shower, hoover attachments, curtain poles cut too short and various bits of pipe/gutter. He also uses it to strengthen his knees before playing volleyball, by wrapping tape under the patella. I think he’s supported his post-sprain ankle with gaffer tape too.

Dr Dougie’s speciality is duck tape on cuts. If he cuts himself at home he immediately reaches for the superglue in the garage to cauterise the wound then keeps the edges of the wound together with his trusty duct tape. I do hope in his surgery he would treat patients with proper medical glue and steri-strips. Though to be honest his skill with that isn’t much better. I remember when he glued a wound on a little girl’s forehead and accidently glued his rubber glove to her head. In the end he had to remove the glove and, as it dangled from her head, he cut it as close as possible to her head so she left the surgery with a closed wound but with an attractive flower of white rubber as an adornment. Thankfully she and her mother thought it hilarious so she wore her rubber flower with pride until it eventually dropped off.

You can imagine his excitement, then, when he read an article in one of his medical mags at the weekend which referred to a study suggesting that duct tape is significantly better at treating warts than cryotherapy (liquid nitrogen). My man was quite delighted to have a genuine medical reason for using his tape and I suspect he will keep a few rolls of it in his medical bag now and issue it on prescription (well, probably not the latter).

It led us to thinking of other ways he could use duck tape in his work. Our top three are:

So, readers, any suggestions for me to pass on to the doc and save the NHS some money?