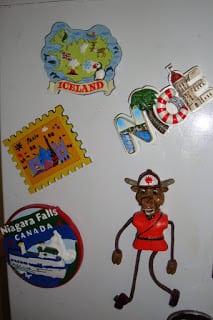 One of the most enjoyable parts of a holiday is deciding which bit of touristy tat to bring home. A universal pleasure, that desperate urge to choose something you will remember forever and show lovingly to your children in years to come. A smooth piece of bleached driftwood. Hand-blown glass.

Indeed. Our family have always brought home shite. Though we did once buy a bull from a Majorcan glass factory. Mum always told me the reason it had five legs, one a bit shorter than the other four, was because it came from the seconds bin. I believed her for years.

Even Grandma managed to cause a furore at customs one year by smuggling a few too many bottles of advocaat in her luggage along with her usual cigarettes. The customs official was rummaging through her huge drawers asking if she had anything to declare and was rather flummoxed by her reply, “Only some of that yellow stuff.” She was wearily waved through.

My earliest memento memory is an old cine film of me clomping down the steps of the plane at Newcastle Airport, aged 5, resplendent in sombrero and poncho, carrying maracas and castanets. I don’t think I’ve moved on since then. I did go through a phase of buying a spoon in every town we visited, always decorated with a little coat of arms. I ask you. A spoon. Thank god for my brother who just collected beer mats from pubs and stuck them on the ceiling in his bedroom.

In Pompeii my mother managed to dig up a big chunk of marble with her foot which she secreted into her handbag along with lava from Vesuvius. In Rome the shops round St Peters were stuffed full of religious temptation. I always wanted to have a glow-in-the-dark Mary. Well, who wouldn’t?

The rudest tat was always found in Catholic countries – all that suppressed sexuality came out in their souvenirs. There was the little monk who flashed his plastic willy when his button was pressed. If I remember rightly my brother graduated from beer mats one year and took home a tiny nun whose boobs inflated when he pressed her belly. Happy times.

Thank heavens my own son has such a harmless holiday collection of fridge magnets. So cheap, easy to find and, as yet, inoffensive. Must have his father’s genes.

My favourite tale regarding holiday mementos, however, comes from our fly-drive trip round Eastern Canada. Early on in the fortnight we had a happy wine tasting session and purchased two bottles of special icewine which was quite an expensive dessert wine, recommended as an accompaniment to chocolate. I thought all wine went with chocolate but nodded intelligently and fished in my purse for my credit card nonetheless.

At the end of the holiday we were due to fly home from Montreal. We faffed about at the British Airways computer terminal to get our boarding cards and seat reservations then queued for a blissfully short time to drop the bags off. There was a feeling of elation as the cases disappeared from view, only to be replaced by Dougie’s face suddenly dropping:

“You know what we’ve still got in the hand luggage?”

“Nope, I didn’t think when the woman was talking about have you got any liquids etc etc, blah blah..”

“YOU DIDN’T THINK! YOU’VE BEEN LUGGING TWO BOTTLES OF THE BLOODY STUFF ROUND CANADA FOR A FORTNIGHT!”

“HOW COME IT’S MY FAULT, YOU DIDN’T THINK TO PUT THEM IN THE CASES EITHER!”

“BUT THEY’RE ON YOUR SODDING BACK!”

Okay, so we had in our hand luggage two lovely bottles of special wine we’d been carrying around since Day Three. Regulations say we can’t take liquids onto the plane and our cases were already somewhere in the bowels of Montreal airport. We had three options:

A: Pour them down the sink

B: Give them away to someone

C: Drink them before we went through passport control.

Dougie favoured option C but I couldn’t face slugging down two bottles of syrupy dessert wine before getting on a plane and risk being chucked off for dancing the macarena down the aisle. So we considered option B and walked back to the BA desk where a really nice chap had helped us at the computer terminal. We explained our dilemma and, as we were about to offer him the booty, he spoke to his colleague at the desk. She calmly picked up the phone, rang someone and five minutes later a little man appeared wheeling one of our cases! Dougie opened the case, revealing all our dirty washing to the gathering crowds, and slipped the bottles in between the more fragrant items. That’s service for you. Willy Walsh would have been so proud.

Thanks to Ellen at Ready for Ten for starting the ball rolling with this topic. Now, what do your kids like bringing back from holiday?