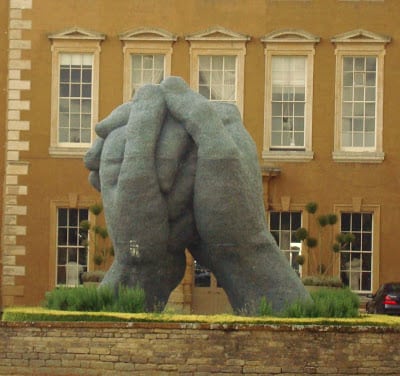 Sometimes when you’re driving you come across something unexpected which makes you pull over and get the camera out. This was one such occasion, last October, taking the scenic route across to Midlands towards the Cotswolds.

My husband and I had just had a ridiculous conversation at a junction:

Dougie: Is it right or left?
Me: It’s right….Aynho.
Dougie: So which way then?
Me: I’ve just told you! Right.
Dougie: But then you started dithering: ay…no. So is it left then?
Me: No, it’s right! I said ‘Aynho’
Dougie: There you go again, AY…NO
Me: NO….IT’S  AYNHO. THE VILLAGE. ON THE SIGN. LOOK!

Thankfully the argument petered out when we spotted a huge sculpture of a pair of clasped hands in the grounds of the 17th century mansion, Aynhoe Park. We had no idea about the country house or the clasped hands and, as the building looked private, we drove on. Later we discovered the sculptured hands, called ‘The Kiss’, were part of a collection of work from artist Sophie Ryder and she was exhibiting at Aynhoe Park.

I’m glad I took the photograph but regret not having the confidence to drive through the imposing gates and ask to look around. A missed opportunity.

I chose this photograph for The Gallery this week: the theme is ‘Hands’.