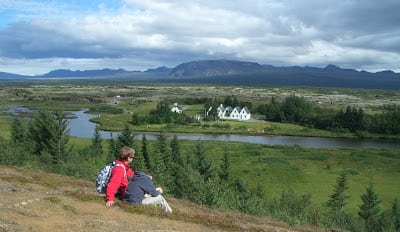 For Tara’s Gallery this week we have to choose our favourite photo. For me, it had to be this one, Thingvellir in Iceland, for a variety of reasons.

The Geography
The great fault line at Thingvellir (or Pingvellir), running right through Iceland and the Atlantic ocean, indicates where where the geological plates of North America and Europe are pulling slowly apart. When we visited we weren’t entirely sure where the actual centre line was in this vast plain but we pretended to have our feet in different continents as we explored the national park. I remember getting all geological on the family, describing the awesome power of nature and blabbing on about the Mid-Atlantic Ridge, earthquakes and the like. Hubby frequently raised his eyebrows as the accuracy of my narrative was questionable, to say the least.

The History
This is also the place where Iceland formed the world’s first parliamentary democracy, the Althing, in AD930. Dougie took over the narrative at this point, spouting forth like the geysir we had just seen, but with a great deal more knowledge than my own efforts.

The Blog
Our holiday to Iceland was the catalyst for my blog. ‘Mum’s Gone to Iceland’ was the first post when I typed up my holiday diaries and, of course, the ‘Mum’s Gone to’ name carried on wherever we went after that. The photo was the original header before it became all warm and pink.

The Photo
There is so much I love to look at in the photo itself: the brooding sky, the meandering river (just like in my school Geography books), the row of perfect white houses (summer residence of Iceland’s Prime Minister) and my two fellas in the foreground.

The Humour
Look again at Rory in the picture…..a headless boy. Poor lad was weary and, resting on the hillside, his head drooped to his chest. Makes me laugh every time I look at him: the headless hoodie!