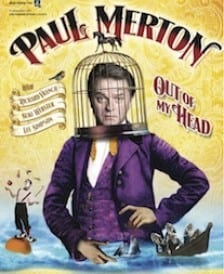 It’s always a bit ominous when you set off for an evening to see a show knowing it hasn’t been particularly well-received by the critics and the general public. I’d bought tickets for us to see Paul Merton’s new Out Of My Head Tour , for Rory’s 16th birthday: he has always loved Paul on Have I got News for You and Dougie and I have long been fans, since the days of Whose Line Is It Anyway?

We’d been looking forward to the show at King’s Lynn Corn Exchange but now I was starting to doubt our decision as some people were suggesting it wasn’t really stand-up, the jokes were dated and that the show, where the audience would ‘discover the bizarre workings of Paul Merton’s brain, as he muses on the mighty behemoth that is his noggin’ was ultimately disappointing.

Well, I’m happy to say that my family and I really enjoyed it. There were times when a belly laugh was appropriate, other times a good old chuckle was the order of the day and, on occasions, a wry smile was called for. It was quite old-fashioned in style, with a music hall atmosphere and content reminiscent of a university revue: Pythonesque flying bunnies, ventriloquism and some very silly sketches made for a great evening’s entertainment.


Paul is joined on stage by his wife, Suki Webster and old friends Lee Simpson and Richard Vranch. Whilst Merton recounts life-changing moments at school, his first forays into television and a stay in a psychiatric hospital, his team bring the stories to life with music, magic and improvisation. Some parts work better than others but the overall content is fun, warm and engaging.

As a family we’ve seen a lot of stand-up comedy over the last few years: Rhod Gilbert, Ross Noble, Russell Kane, Dave Gorman, Micky Flanagan and Milton Jones. Paul Merton’s show isn’t a typical stand-up performance. In fact, he sits down for a fair bit of the evening. But standing up, sitting down, or floating on his bed up to the moon, he proved to be a very likeable, funny man.

If you want to see for yourselves, the tour continues across the UK until the end of May.

Note added after publication: I did write that I felt most of the audience enjoyed it, judging by the applause, but comments below  suggest this wasn’t the case, I have removed that sentence so my opinion is my opinion alone.
Trish