Home  >  Uncategorized  >  Mum’s Gone To Japan: Things to do in Osaka

“The carpet will be spotlessly clean then,” I whispered to Dougie, remembering the brand of stain remover I’ve got in the cupboard back home.

Unfortunately, we didn’t have a chance to examine the carpet’s credentials because, when we entered room 1001, it was obvious it hadn’t been cleaned at all after the last guest: the bed was unmade and towels were on the floor.

The hotel staff at the ANA Crowne Plaza in Osaka were understandably mortified about the mix-up. We weren’t too concerned as these things can happen. We happily changed rooms. The mark of a good hotel and excellent customer service, however, is how they deal with this kind of blip. The manager at our hotel went above and beyond in his attempt to put things right. We were offered the choice between complimentary use of the swimming pool and spa (there would normally be a charge) or free entry to the club lounge from 6-8pm that evening. We weighed this up for all of one second before deciding two hours of free food and drink just had the edge on a swim and a sauna.

At 6pm on the dot we headed up to the Club Lounge. It had the air of a Gentlemen’s Club: all polished wood and wing-back chairs. Like kids having free access to a pick ‘n’ mix, we made absolutely sure we tried as many of the canapes as possible in a two-hour window. Ooh just another sliver of steak and maybe an extra macaron? Wine? Why not? Whisky to finish? Oh go on then.

Osaka is well-known as Japan’s foodie city and yet, here we were, stuffing our faces in a corporate hotel, rather than exploring the fabulous Japanese restaurants in the famous Dotonbori district. We put that right the following evening. Dotonbori is a noisy, bright, colourful part of Osaka, just a short hop on the Metro from our hotel. Locals and tourists make a beeline for the neon lights that dazzle on the buildings either side of the canal. 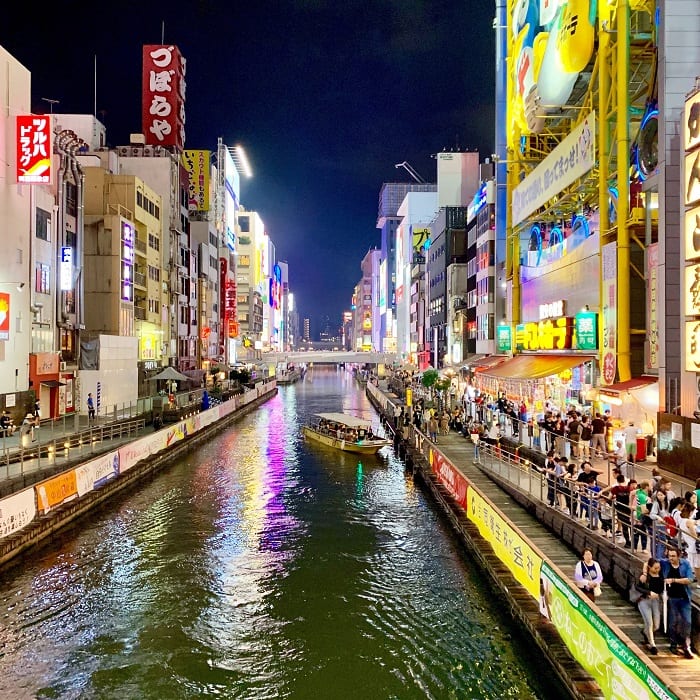 Some of the neon signs have become iconic such as the Running Man. Other signs are large and lurid and cartoon-like. 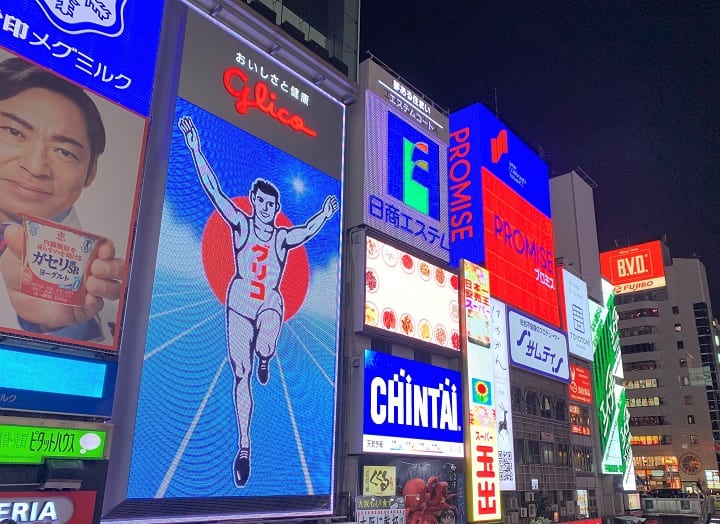 Cleverly incorporated into one of the buildings is the large Dotonbori Ferris Wheel, sometimes called the Ebisu Tower. Unlike usual big wheels, the capsules all face out onto the street. For part of the rotation, you’re still within the building. It’s only when you move higher up that you realise there’s air around you. For another great view of the Osaka bright lights, it’s definitely worth a go.

During the day, we opted to see as much of Osaka as possible on foot. We took a route along the river, heading towards Osaka Castle. The river walk was far prettier than I’d expected in this Japanese metropolis. As we found in Kobe, there are many sculptures on the streets of Osaka. It’s a real pleasure to come across large and small works of art as you explore the city. 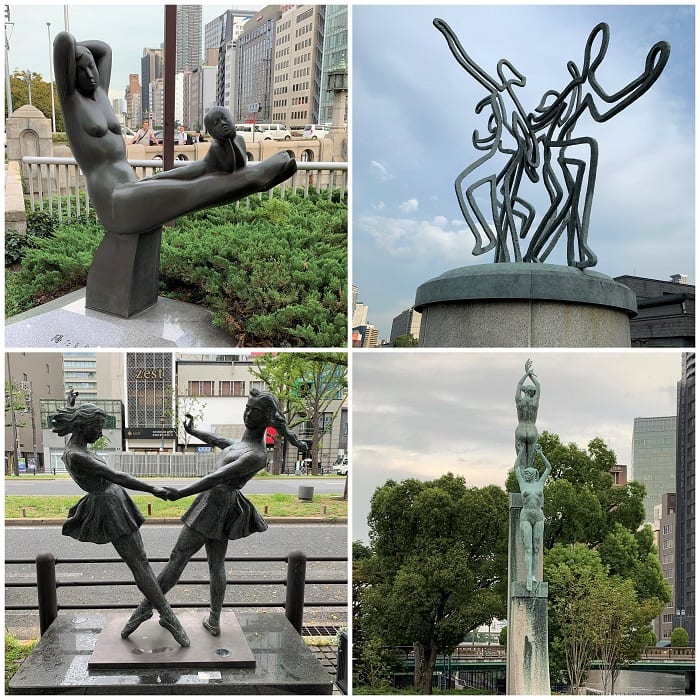 We were also surprised to find ourselves in the Nakanoshima Park Rose Garden which was being carefully tended by gardeners. It was a treat to see roses on an island in the middle of the Okawa River, whilst all around were towering skyscrapers.

Osaka Castle was certainly worth the walk. Set in huge grounds, it’s an impressive structure on similar lines to the one we visited in Hiroshima. Despite it being a smaller reconstruction of the 1586 original, there’s a sense of power and history about the building and its surrounds.

Of all the museums we could have visited on a drizzly afternoon, the Museum of Oriental Ceramics caught our eye. They had a special exhibition. Marimekko Spirit, celebrating the artistic links between Japan and Finland. As you may know, we’ve adored our trips to Lapland in recent years, so we indulged our love of Finnish design by seeing it in a Japanese context. The exhibition marked 100 years of diplomatic relations between the two countries. The Ambassador of Finland noted that a ‘love of design is a bridge that unites Japan and Finland.’ Both countries ‘appreciate harmonious forms and patterns.’

Seeing beautiful Finnish ceramics in the middle of Osaka felt a little surreal. To walk inside a reconstruction of a Japanese tea room decorated with Marimekko designs – that was pretty cool.

Other attractions in Osaka

We weren’t able to see all that Osaka has to offer, as we opted to travel by train to Kyoto on one of our two full days in the city. This was the only opportunity to see the historical treasures of Kyoto so, unfortunately, our Osaka sightseeing was curtailed. We didn’t manage to see the museums of history or art or the Floating Garden Observatory. We also skipped Spa World which caters for 5000 bathers. Nor did we take a trip to Universal Studios which is a major attraction in Osaka, complete with Harry Potter rides.

We may not have explored as much of Osaka as we’d hoped, but I feel we captured its spirit during our short visit. It’s a fun, friendly, foodie city and its location near other attractions in Japan makes it an excellent base for travellers.