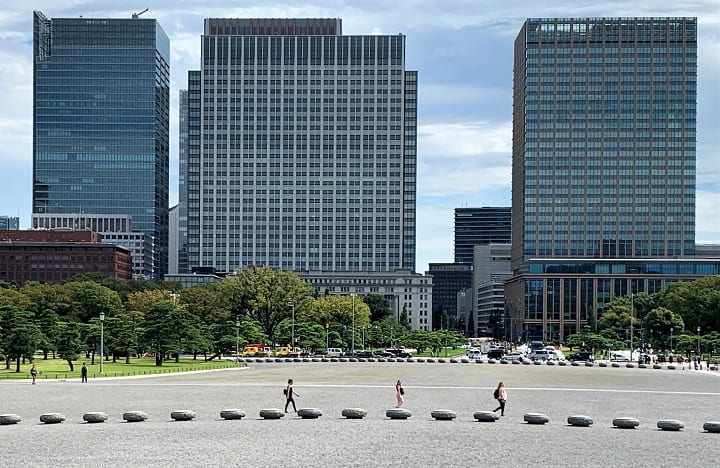 A bucket list trip? Yes. A retirement present from my husband to himself? Absolutely. This was always going to be the trip of a lifetime. A holiday in Japan coinciding with the 2019 Rugby World Cup. We booked a package with England Rugby Travel as they were the main UK agents but we opted for one of their Scotland tours so we could follow Dougie’s home country in the pool matches. The itinerary began in Tokyo before heading to Hiroshima, Kobe, Osaka, Nagoya and Odawara then back to Tokyo. The package included all the flights, hotels, match tickets and transfers but we were given freedom in each city to book tours if we wished (we decided not to) or do our own thing (which we did).

Where did we stay in Tokyo?

The Hotel New Otani is a renowned establishment in the city. It was originally constructed for the 1964 Olympic Games but has increased in size over the years. It’s now a mini-metropolis, with dozens of restaurants and shops for its guests. With a 400 year old Japanese garden in its grounds and the main building featuring in the James Bond film, You Only Live Twice, it has quite a pedigree. The Welsh and Japanese rugby team were based here for part of the tournament. We didn’t know this in advance so I was certainly taken aback when a number of burly blokes strolled out of the lifts one evening.

On our return to the UK we learned that the hotel was the venue for a banquet hosted by Prime Minister Abe to celebrate the enthronement of Emperor Naruhito. It was attended by several members of other royal families, including Prince Charles. If only we’d been able to stay on another week – I’m sure I could have rustled up something glitzy to wear.

Travelling around Tokyo with a Suica Card.

Japanese cities are easy to negotiate as each regional pre-paid travel card is now interchangeable. Our Suica card in Tokyo could be used in all the other cities we visited. Equally, cards registered in other cities can be used on transport in Tokyo. Working like Oyster cards in London, the card can be topped up at stations. It’s always worth checking you can use your card on certain trains as private lines might require you to buy a ticket instead. Travel between cities is often not included. For travellers exploring Japan, not just Tokyo, a Japan Rail Pass is definitely worth investigating (we didn’t need one as England Rugby Travel organised our travel between cities).

We found the Tokyo Metro easy to navigate. The lines are colour-coded from the station entrance through to the trains. The stops have numbers as well as names so if you’re travelling, for example, from Akasaka-Mitsuke (the nearest metro station to Hotel New Otani) to Shimbasi on the Ginza line, you just have to remember that you’re travelling from G5 to G8.

The stations are clean, with toilets and vending machines. In fact, there are vending machines on virtually every street corner in Japan so you’ll never be far from refreshment. The machines will often accept Suica cards – handy if you’re short of cash or wanting to use up the money on your card at the end of the holiday.

If you’re thinking about using a car in Japan, Kirstie, who writes at The Family Adventure Project, has some excellent advice that might allay any fears you may have – Driving in Japan: Practical tips for a Japanese Road Trip. When you’re on the road, keep an eye out for adorable cartoon-style road barriers, like the ones we saw in Nagoya.

Tokyo is obviously huge so we decided at the offset not to try and see everything in the guide books. I’d recommend choosing an area and maybe just seek out a temple or a shrine. Sit for a while and people-watch; take a side-street and explore.

We were there for six nights from mid-September and four nights during mid-October. It was hot and humid, particularly during the first week, which meant that we did flag a little at times. Our sightseeing was also curtailed by Typhoon Hagibis which confined us to our hotel for 24 hours. We had rugby to watch in Tokyo and Yokohama and this accounted for some of our days in the capital. Having said that, combining a sporting event with a holiday is a great way to experience a country’s culture. 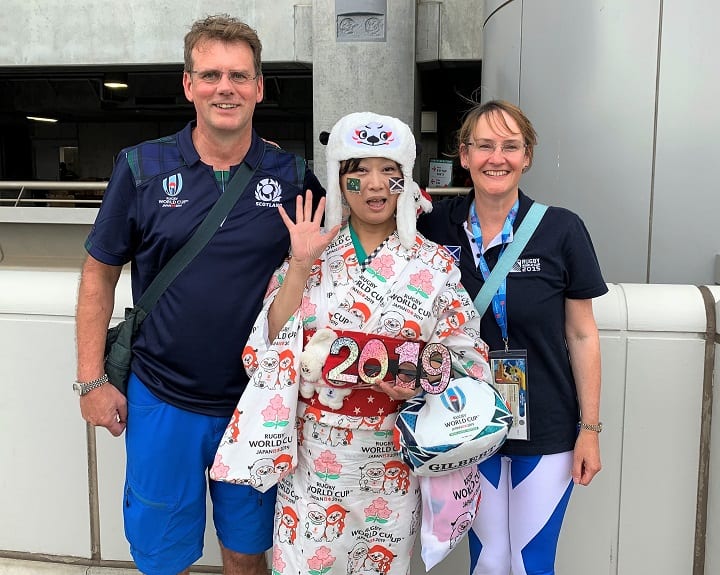 We were typical tourists most of the time but on match days we felt we were part of the Japanese sporting community. If you plan to be in Japan for the 2020 Tokyo Olympics and Paralympics, I’m sure you’ll enjoy juggling sporting events with Tokyo’s tourist attractions.

Here are a few suggestions of things to do in Tokyo.

What better way to learn about Japan’s religious customs than head to Tokyo’s most sacred temple. We approached Senso-Ji via the Kaminarimon Gate (‘Thundergate’). We walked down the Nakamise-dori, a street crammed with small shops and stalls, selling many traditional crafts and food. Within the temple grounds are several buildings including a five-storey pagoda. It’s fascinating to just be an observer; to watch the Japanese people following their daily rituals. Visitors offer coins and light candles to honour Kannon, the Buddhist goddess of mercy. The incense burner was surrounded by people wafting the smoke over themselves as they believe it will bring good health. The omikuji fortune telling operation was doing brisk business and I’m pleased to report both Dougie and I received good fortunes that day.

A popular public park, Ueno has so much for visitors to see. Choose from a number of museums including the Tokyo National Museum. It’s the location for the zoo, several shrines and temples plus, if you’re there in the spring, a walkway lined with cherry blossom. We had plans to do so much here but dropped them all when we realised we had stumbled upon the final day of Tokyo Edo Week. This celebration of Japanese culture allowed us to learn about traditional crafts and costumes including a fabulous display of women wearing kimonos. We were also entertained by a number of potential Tokyo’s Got Talent entrants. I’m afraid the museums didn’t get a look in when we could buy a craft beer, pick up some noodles and watch a group of ninja warriors slice the air with an acrobatic dance display. 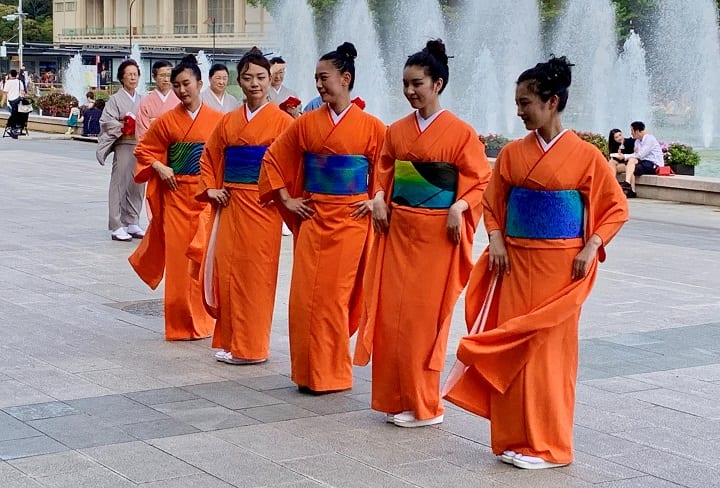 Most of the Imperial Palace is inaccessible to visitors but you can join a free tour to see a small part of the grounds. The East Garden is usually open but we turned up the day after a national holiday when it was closed. All was not lost as the famous double bridge, Nijubashi, plus the palace watchtower, can be seen from the south-west corner of the plaza. 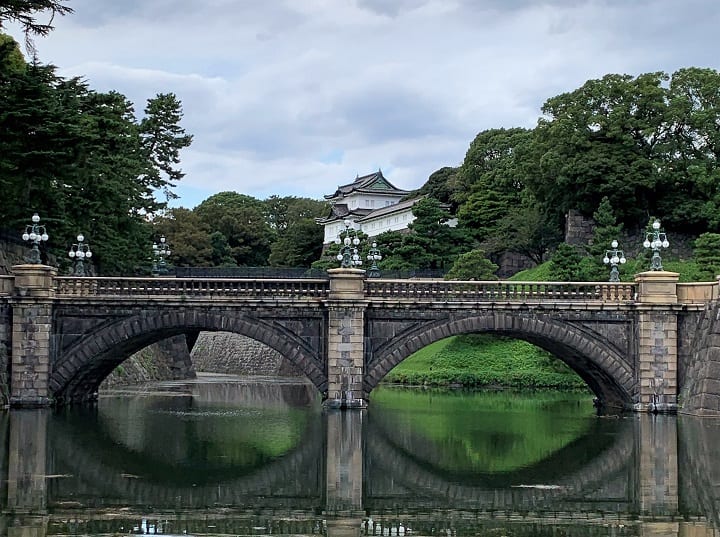 On the edge of Tokyo Bay, surrounded by skyrise buildings, the landscaped Hama-rikyu Gardens appear to be in a time warp. Originally belonging to the Tokugawa shogun family as their castle gardens, it was regularly used for duck hunting. There are bridges, sea-water tidal ponds and a tea pavilion. This is the perfect spot for escaping the noise of the city, if not the sky-scrapers. 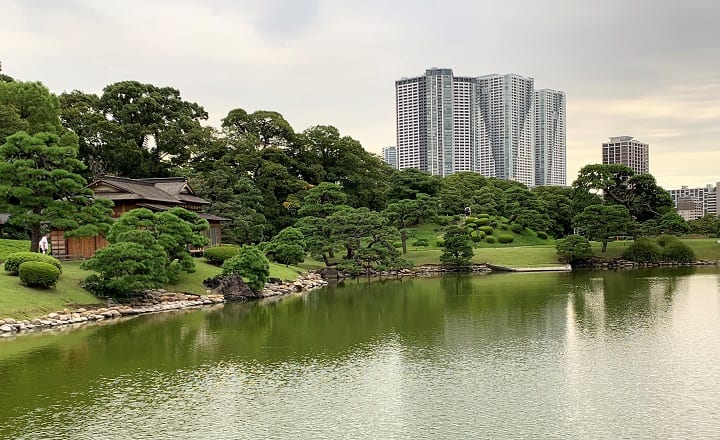 If you like your Tokyo neon-lit, head to Shibuya and have fun crossing the road. The Shibuya Crossing may well be the busiest intersection in the world. It’s certainly the busiest in Japan. Hundreds of people wait for the lights to change and then weave their way across the road. It’s great to join the other pedestrians but just as cool to watch. Many people head to Starbucks on the corner and watch from an upstairs window seat. We took the escalator up inside Shibuya station to find a reasonable grandstand view. If you’re lucky, you might just see mad people carting along the street. 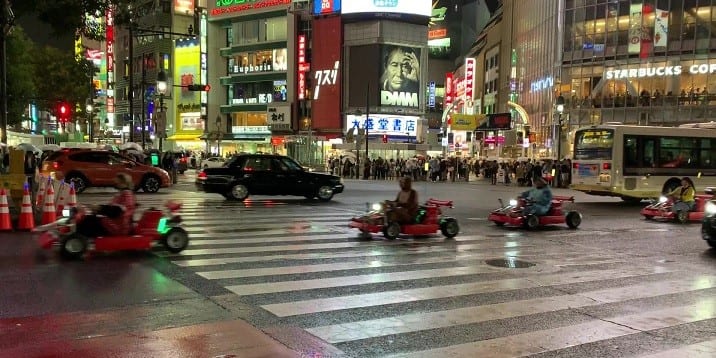 While you’re at the station, don’t miss the 30m mural, Myth of Tomorrow, painted by Okamato Tarō. It depicts the atomic bombing of Hiroshima. Just outside Shibuya Station is a statue dedicated to an Akita dog, named Hachikō. He used to meet his owner, a professor, here after work every day. When the professor died in 1925, Hachikō continued to wait patiently every day until his own death, ten years later. Cue tears and lump in throat…

For some serious souvenir shopping or a bit of contemporary art, the neighbourhood of Roppongi Hills hits the spot. We spent a considerable amount of time and a fair few yen, in the stylish Tokyo Midtown complex before heading to the hills. We should have visited the Mori Art Museum or the Tokyo City View observatory but instead we ambled about, as usual, before being attacked by Louise Bourgeois’ ‘Maman’ spider. 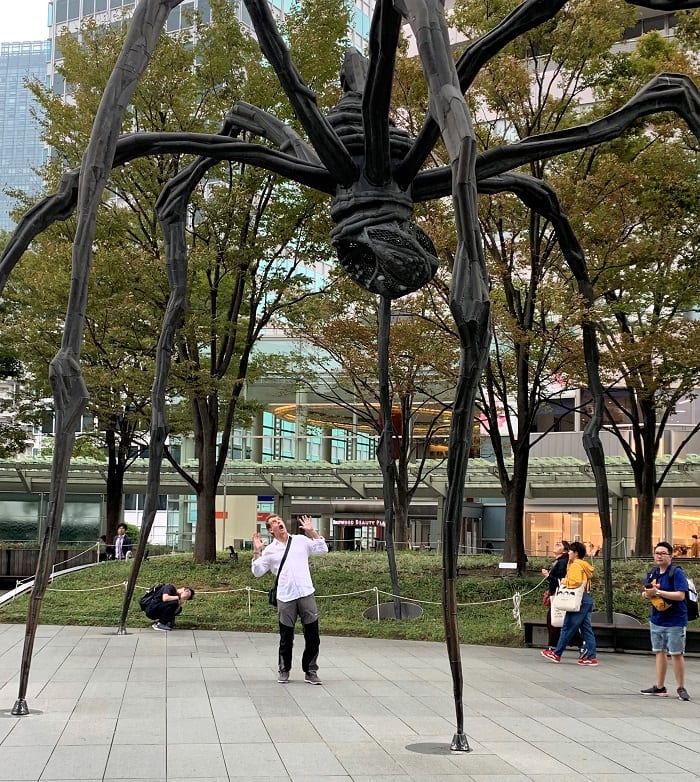 Another shopping highlight is the area of Ginza, where all the top brands are located. We were incredibly lucky, on our final day in Tokyo, to discover the main street was closed to traffic because it was a national holiday for health and sport. I suppose that should have been the day we hiked up a hill or something worthy of the holiday’s intentions. Instead we messed about on the zebra crossings and cruised the escalators of the malls such as the very chic G-Six. Tokyo is a massive city and it can seem bewildering at first. But, a little like London, it’s made up of many separate neighbourhoods which have just spread to form one large conurbation. Thankfully the orderliness of the Japanese, their politeness and measured behaviour, helps to make Tokyo very manageable for visitors. It’s safe and spotlessly clean. And, if ever you feel the vastness of the city overwhelming, there’s always a nearby shrine or temple. Take a seat, watch the locals perform their rituals, and breathe…