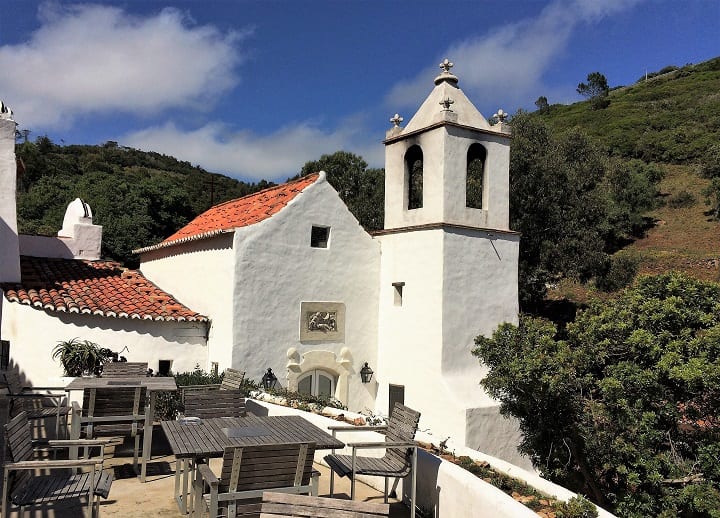 I left you in my last blog post as we were poised at Cabo Rosa, adjusting our rucksacks and cagoules, ready to head to Azóia. This was officially Day One of Inntravel’s Palaces and Pathways of Sintra walking holiday in Portugal. Our trails this week would take us through the Sintra-Cascais Natural Park. Dougie decided we should get a head start on our fellow walkers. Not that it was a competition to get to the next hotel or anything. No, no, I’m sure that never crossed his mind…

Despite the misty weather, there wasn’t a great deal of actual rain and the temperature was about 20°C. Not bad at all for a day’s hike. We walked briskly along the coastal path, spotting helpful signs telling us where to place our mobile phones in order to photograph a scenic spot. Hmm, if only the low clouds had lifted I imagine the shots would have been stunners. 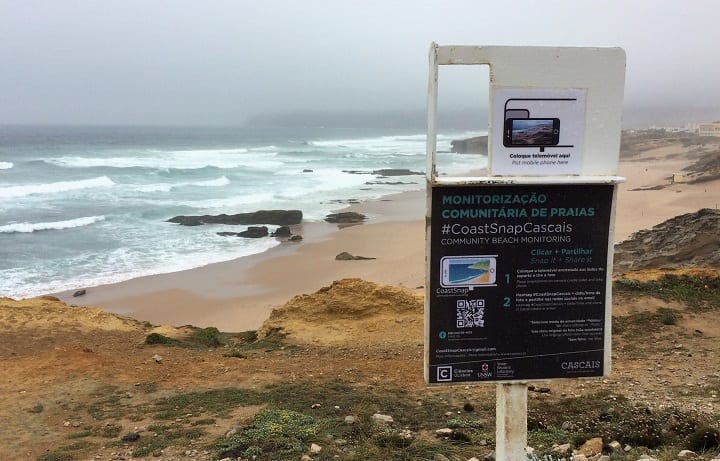 We reached Guincho Beach fairly quickly. It was a huge expanse of sand, reminding me of Woolacombe Bay in Devon or somewhere on England’s North East coast. No chance of a paddle but the sight of a beach bar was very welcome. We ordered hot chocolate and braved the outside terrace, tipping the rainwater from the seats and sitting gingerly on the edge of our coats. This really did feel like home. 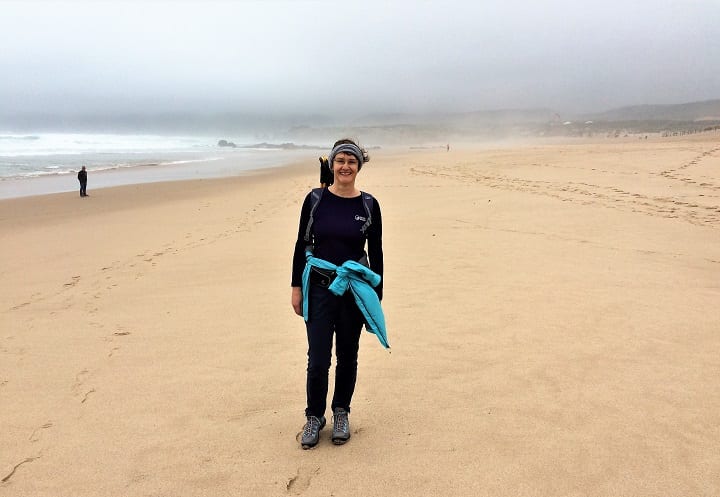 It was the sight of Edward and Rosemary, our Inntravel competitors (sorry, companions), walking past the beach bar and striding off into the distance, that spurred us to get a move on. Our notes told us to ‘continue along the coastal edge, picking your way through the sandy rocky terrain’. In hindsight I realised that this meant just make your own way over the headland. I was being pernickety, assuming there was only one specific path. Cue some squabbling until we reached the ruined fort and I realised I’d been overthinking it, as usual.

We lacked sunshine and views but were compensated by the assault on our other senses. The sound of the sea was crashing against the cliffs and there was an incredibly strong scent coming from a blanket of white flowers. I’ve since discovered they were cistus ladanifer, often called gum rockrose or, in Portuguese, esteva. They were very sticky to the touch too. 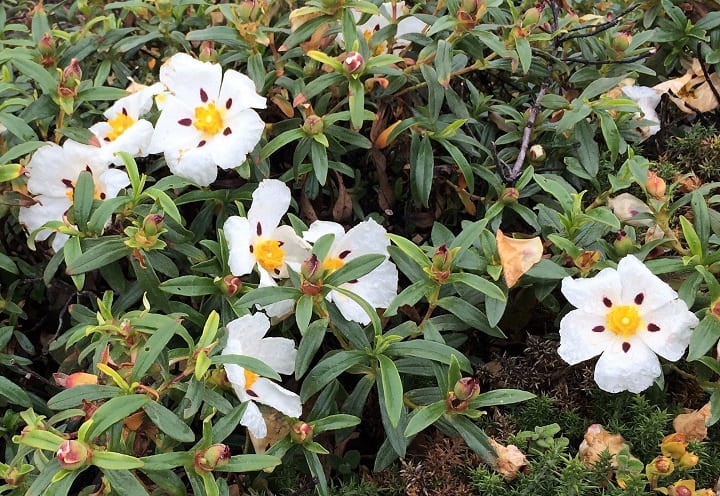 Moving inland from here, the rain stayed away but the clouds settled deep in the valleys, making visibility even more difficult. But the directions were good. When we took a turning and found ourselves surrounded by bamboo, we knew we were on the right path. Our notes guided us through tiny hamlets, pointing out fire hydrants, house names and electricity posts. They also teased us with the suggestions that we would see our destination; ‘a cluster of white buildings with tiled roofs down in the valley to your left’. We had to use our imagination.

We were only 1km from the hotel but couldn’t resist the recommended pit stop: the Don Quixote bar. We thought we were in the middle of nowhere so it was a surprise to find a colourful and busy bar. Yes we looked bedraggled and everyone else looked chic, sipping G&Ts in their Sunday best, but we were warmly welcomed. For some bizarre reason we opted for scones and beer, which must have made the locals think we were even more ridiculous than we already looked. But we were happy, looking out of the huge picture windows at the non-existent sea view.

It was only a short jog down the hill from there to our hotel. The Convento de São Saturnino didn’t disappoint even in the drizzle. A beautifully restored hotel, with links to the 13th century chapel on the hill above it which was once a destination for pilgrims. The owners, Jonathan, whom we’d met that morning, and his wife Sharon, have created this fabulous boutique accommodation, filling the rooms with antiques and objets d’art. It was charming and rustic, with a log fire burning in the main living room. Perfect for walkers in the Sintra-Cascais Natural Park, I spotted some sturdy boots and socks drying out on the fireplace.

There are only a small number of rooms at the hotel and we were lucky to be given a suite, located in a separate building. It was a wiggly walk along a little path and I made a note to myself to go easy on the wine later. Dougie and I adored our set of rooms which were just as higgledy-piggledy as the path to reach them. Cue Dougie banging his head on the doorframes at frequent intervals.

Our two nights here included dinner on both evenings. We were slightly nervous that all the guests would be sitting at a communal table. This proved to be a roaring success thanks to the cooking from the Nepalese chef and the extraordinary coincidences which bound the guests together. (You can read about this in my Trish Takes Five column written for the Lincolnshire Free Press newspaper) Each couple were given a complimentary bottle of wine but we managed to stagger back to our little sanctuary without any mishaps.

Our gang – yes, we’d bonded over soup, sea bream and soufflé – were very chipper at breakfast and eager to start on the day’s circular walk to Peninha chapel and back. We checked the forecast and delayed our start for a short while. The route was 11.8km and the notes indicated walks along forest tracks. As there would be no obvious place for refreshments, unless we stopped off at Don Quixote’s gaff again, everyone chose a packed lunch.

Again our notes mocked us, enthusing “Keep looking back at the views to Guincho and Cascais – it’ll break your climb!” There was much putting on and taking off of jackets as we became wet and then started to feel steamy. The ascent was quite tough but we reached the chapel of Peninha only to find one of our other Inntravel couples, Martin and Sally, were already there eating their sandwiches. The four of us sat, chatted and chomped and then the most incredible thing happened. The clouds parted and suddenly the coastline was visible – blue sea, the white houses of Cascais and Estoril and the pretty terracotta roofs. It was like Brigadoon appearing through the mists – but without the tartan. Peninha itself looked so much more appealing in the sunshine; its colours more vibrant. It’s amazing what the sun can do for your energy levels: we skipped up the steps to the very top of the chapel and skipped down again. 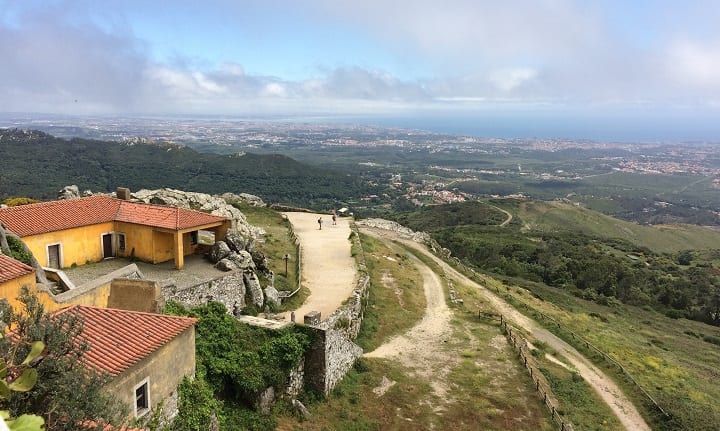 I had been reading that Peninha Chapel is associated with a legend. It’s said that a shepherdess, who was unable to speak, lost one of her lambs. I’ve no idea of her name but let’s call her Mary. Mary ran up to the hilltop and found the lamb being cared for by a lady. Suddenly she regained her voice. In recognition of the miracle the local community built the chapel, known as Our Lady of Peninha. I read this little tale to Dougie as we sauntered back down the hill. Our shepherdess may have lost her lamb on these slopes but she wasn’t so careless as to lose her way. Unlike Team Burgess. We weren’t concentrating so instead of taking a circular route back to the hotel, we ended up on the same path as before.

Halfway down the hill we bumped into Martin and Sally. They were keen geocachers and had a habit of popping out from the bushes after they had dived in hunting for treasure. Had we missed anything exciting on the return path? Yes, we had. Martin and Sally (and, we discovered later, Edward and Rosemary) had come across a parked car in a forest clearing. The car was rocking and the unmistakable sight of a naked male posterior could be seen through the steamed-up windows. Funny but I couldn’t see that mentioned in my route notes anywhere.

The final few kilometres back to Convento de São Saturnino were glorious. Those promised views were visible, the temperature rose and the countryside transformed in front of our eyes. 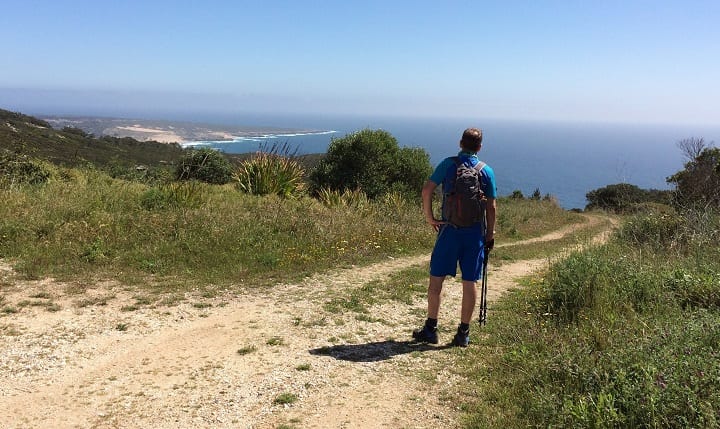 The hotel looked even more idyllic with a backdrop of blue sky and we discovered our bedroom window had a superb view of the sea. A glass of wine by the swimming pool, the promise of another night of fun dining and a weather forecast which spoke of wall-to-wall sunshine for the remainder of the week. We drank to that. 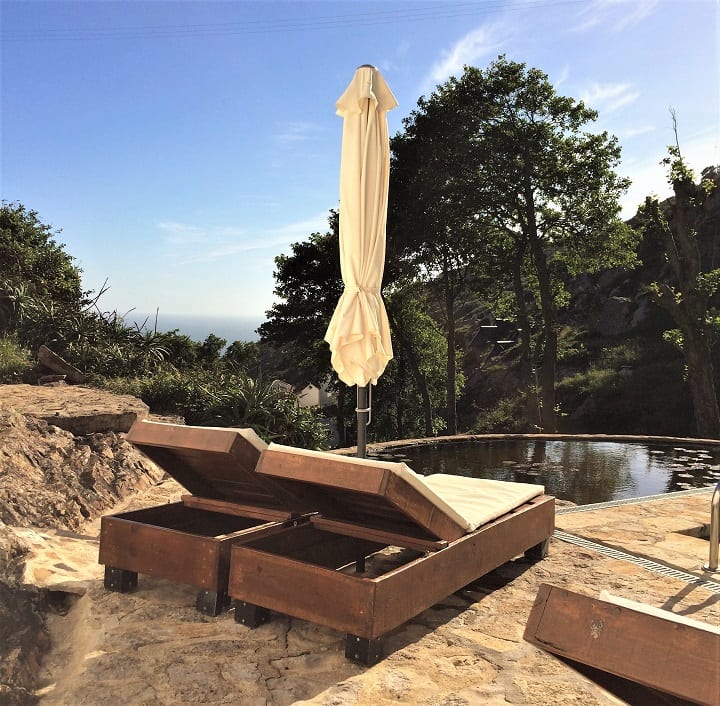