Home  >  Blog  >  Once is not enough: a second visit to Hotel Ylläshumina in Lapland.

Do you go back to the same place on holiday? There are so many destinations I’d still love to visit that I don’t often go back. I made an exception for Lapland and, in particular, Hotel Ylläshumina in the village of Äkäslompolo. Last January we booked a week there with Inntravel. It was a try-it-out week for cross-country skiing in the Pallas-Yllästunturi National Park. The experience was so incredible, we were desperate to do it again. I’m sure Dougie was also keen to get his money’s worth from his natty fitted ski-pants: one outing was never going to be enough.

There’s something very reassuring about going back to the same place. You know the lie of the land, where the shops are, where to sit in the dining room. Dare I say it, you feel a little smug when the newbies are dithering at the buffet table. We had plans to visit our favourite café from last year, Navettagalleria. I was looking forward to a lingonberry liqueur after dinner and picking up an extra set of coffee cups from the craft shop in the village.

Opting for a suite at the Hotel Ylläshumina

We chose a standard room last year at the Hotel Ylläshumina and it was perfectly lovely. It was cosy, warm as toast and the beds were comfortable. True, they were twin beds, separated by a table. But, to be quite honest, we were so exhausted by the cardio-vascular workout that is cross-country skiing and so full-up on hearty Finnish food (mmm silky mashed potatoes, creamy puddings…) if Dougie had crept over to my side in the middle of the night, he’d have been sent packing.

This year, we decided to splurge a bit. The hotel has built a number of superior and suite rooms with double beds. Still traditional log cabins but with more luxurious touches such as log fires and stylish kitchens. What makes the suites even more special than the superior rooms is the presence of a bathtub. I’d have paid a king’s ransom for a bath last year. I know the Finns love their naked saunas but I’m an uptight Brit with a Catholic upbringing so I’m accustomed to changing my swimming costume awkwardly under a towel. After a day on the trails, that bath was an absolute joy. I could have spent my whole holiday in the beautiful bathroom, luxuriating in the tub before slipping into a very chic inky-blue waffle robe.

Choosing not to tire ourselves as much on the trails, we spent happy afternoons in our luxury love-nest. We sipped wine out of stylish Iittala glasses and cosied up on the faux-fur throw on the sofa, whilst the log burner gently crackled beside us. Romance was back on the agenda.

Having another go at cross-country skiing

Last year we skied all week, although as we were staying during the Polar nights, the amount of daylight hours was limited. Just a few weeks later in the season there are far more hours available. To get back into the swing of it, we opted for our usual route from 2018, skiing to Navettagalleria, a break for hot chocolate and cake then a gentle ski across mainly flat terrain, back to the hotel.

On the second day we booked a refresher ski lesson which was invaluable for ironing out some technique issues. We felt ready for a long trail on the third day. It was classed as easy but as the downhills and uphills were far more pronounced on this route, we found the going quite tough.

It struck us both at this point that we didn’t have to ski all week. There are so many activities on offer in Lapland, why not do something else? Dog-sledding, snowmobiling, snow-shoeing and reindeer safaris can all be arranged by the hotel. Or you can just do your own thing. Which we did.

Let’s go to the zoo!

Last year we passed very close by Konijänkä’s petting zoo on a number of occasions. We always planned to visit but the urge to ski overtook the urge to see the animals. This year, when the weather forecast warned of heavy snow, we wisely agreed that a ten minute walk to the little zoo would be a good way to spend the morning. There weren’t many other visitors that day so the animals were very interested in the treats we had bought with our ticket.

No sooner had Dougie begun to rummage in the bag – not easy with thick gloves – than the resident dogs became his faithful friends. I think they were Newfoundland dogs (Landseers?) and they were adorable. They walked alongside us as we made the acquaintance of Hilma the Bactrian camel which originates from the cold Asian steppes, so is very well adapted to Lapland’s freezing temperatures. Likewise the llamas, yak, sheep and goats. Dougie was delighted to meet Aslak, the Highland bull, and they chewed the cud for a while, reminiscing about winter in the Cairngorms.

We met up with some cuties inside too. I was particularly smitten with a little chipmunk, sitting in his feeding cup. We said hello to guinea pigs, turtles, ferrets and bunnies before a well-deserved warm up at the café with coffee and doughnuts. 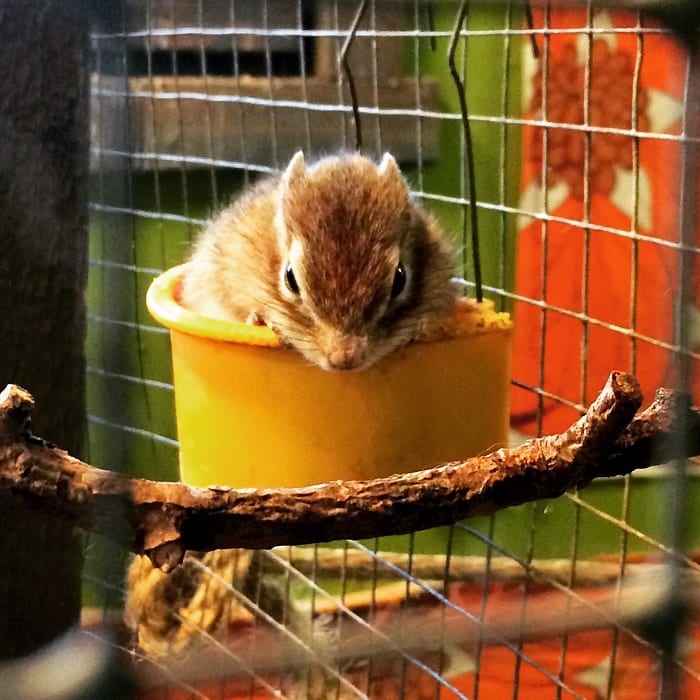 You might be surprised to learn we ventured out into the snowstorm that afternoon. We battled the wind and biting cold as we took a very essential walk – into the village for provisions. Wine and crisps. We filled our trusty rucksacks with Tempranillo from the Alco shop and trudged back to the hotel, clanking rhythmically, ready to share the tale of our foolhardy expedition with our skiing friends.

The cross-country skiing is second to none in Ylläs: over 300km of trails to suit all abilities. Everyone makes use of the winter sports map which marks out the routes. The map also shows winter paths: those requiring the use of special snow shoes (the ones that look like tennis rackets on your feet) and those which are suitable for normal sturdy walking boots.

This proved to be a revelation to us. We have adored our walking holidays with Inntravel, in Austria and Mallorca, so why not go for a walk in the Finnish wilderness? We sussed out a decent route of about 6km from our usual café along a river valley to another café, Kotamaja, nestled between three of Ylläs’ seven hills. The temperature that day had risen to an unbelievable zero, unheard of in February. This meant we didn’t even need our thick winter jackets and trousers – the thinner cross-country ski outfits were perfect and even then we were shedding layers as the afternoon progressed.

We only met a couple of people on the track and they were on fat bikes, adapted for cycling on snow. No-one else was walking that day, despite it being a well-maintained path cut into the snow. It was very deep on either side, however, so we’d have been up to our nether regions if we’d stepped off the trail. It really was a fantastic walk through the woods as the trees were heavy-laden with snow, leading to the creation of some very strange shapes. 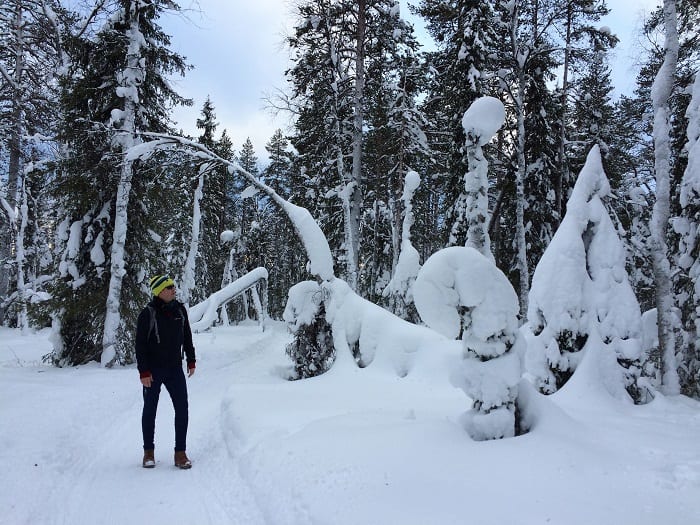 Once we neared the café, the landscape changed. The valley widened; a large expanse of snow with skiers appearing from five different trails, like tyre spokes, leading to Kotamaja at the hub. We upped our pace and joined the skiers inside the café, warming by the central open fire and supping hot berry juice and carrot cake. A quick trip to the outdoor compostable toilet (this truly is the wilderness) and we were ready for the return leg. It never bothers us if a walk involves the same route back. It’s amazing how things look different when you’re facing the other way.

Dougie was fascinated by animal tracks in the snow and we were soon rewarded with the sight of three reindeer. We could just see them through the trees so we kept very still and watched them until they eventually trotted further into the woods. We continued our winter walk, reaching home as the sun dipped below the horizon and we’d racked up a decent 14km.

The temperature was even higher on our last day. The air was still and the sun shone. We planned another walk of about 12km in all, this time along the river valley to the east of Lake Äkäslompolo towards Lake Kesänkijarvi. The jump in temperature transformed the scenery. The trees which had been laden with snow the previous day, had now shaken off their load. It felt as if spring had come incredibly early. We could hear birds chirping and we saw a dipper making the most of the gaps in the ice that appeared on the surface of the lake.

Coffee and apple tart drew us to Kesängin Keidas, yet another café with a rustic loo. This time, after a rest, we headed back to the hotel via the village for some souvenir shopping. We found our treasured coffee cups and added two more to the collection.

A second visit to Lapland was a great success. Going a little later in the season gave us ample opportunity to explore further. There was less pressure to fit everything in or to ski every day just because we had hired the skis for a week. Time slowed, we found a more relaxed rhythm and we adored just being in a place we loved. Returning to Hotel Ylläshumina was an absolute delight. Doing it in style, with the upgraded facilities, was even better.

Would we go a third time? We’ll see. There’s still so many other countries we’d love to explore. But then, there’s that log fire in our room and the scenery which takes your breath away. And six coffee cups might just be more useful than four.

This is a holiday we booked with Inntravel and paid for ourselves. We did receive a small discount in exchange for an article on the Inntravel website.