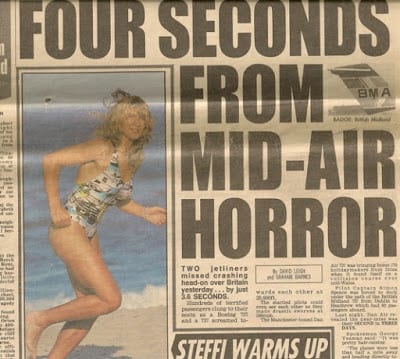 This is a cutting from the front page of the Daily Mirror, June 25, 1990. Ignore Steffi Graf running on a beach (if you can) and digest, if you would, the dramatic headline on the right. Let me highlight some of the text you might not be able to read:
Two jetliners missed crashing head-on over Britain yesterday…by just 3.6 SECONDS. Hundreds of terrified passengers clung to their seats as a Boeing 727 and a 737 screamed towards each other at 28,000 feet.

The startled pilots could even see each other as they made drastic swerves at 500mph.

The Manchester-bound Dan Air 727 was bringing home holidaymakers from Ibiza when it found itself on a collision course over mid-Wales.

Pilot Captain Simon Spence was forced to duck under the path of the British Midland 737 from Dublin to Heathrow.

Dougie and I were on that Dan Air flight, returning from our honeymoon in Formentera, a beautiful island south of Ibiza. It was quite an eventful honeymoon…

On the second day I ran into the bathroom on hearing my husband’s howls, to see a naked man crouched low in the bath wailing and swearing. He had been having a shower when his new wedding ring slipped off and disappeared down the plug-hole. Despite summoning a little man to poke about and check the drains, it was never recovered.

We made friends with two other couples and as a group trounced everyone at the champagne cocktail quiz afternoons as we were the only English-speakers taking part; the Germans weren’t as clued up on Top of the Pops as we were.

To top it all Dougie and I even won the cheesy Mr and Mrs contest, due to my new husband’s ability to do the can-can, with cartwheels, and his skill with the blind-folded “put straw into wife’s ring after being spun round a lot game” ( that’s not a euphemism: stop sniggering at the back!).

Then we came home. All I remember of the near-disaster on the plane was clonking my head on the seat in front as I had been rooting in the net bag looking for a book. Dougie recalls his stomach lurching then pointing out of the window saying, “F**k me, there’s a plane”.

After the plane dived the pilot, ever the professional, could be heard over the tannoy calmly reassuring the passengers in his wonderful, lilting pilot-speak. He apologised for the evasive action, explaining that unfortunately he had been put on a collision course with another plane. As you were. Pretty cool I thought.

There was much cheering on landing: for once, the applause was appropriate.